L.A.X on Spending Spree; Cops Two Cars at a Go and Takes Giveaway to the Streets

Zaza Vibes creator, LAX is going heavy on the Christmas spirit and has bought himself two cars in a day. 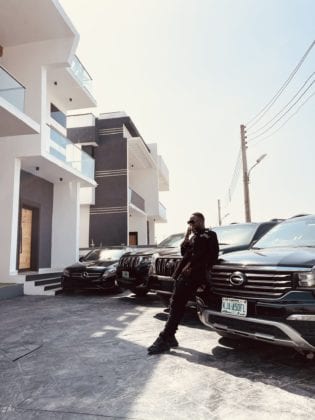 L.A.X Poses with Collection of Cars

The singer who gifted himself with a Benz and a Prado in one day shared receipts of his latest acquisitions on his Twitter with a video of the two cars arriving at his house.

ALSO READ: ‘No Wizkid, No LAX’- LAX Declares to Fans

His Christmas spirit has however not been relegated to himself alone. Prior to his purchase of these two cars, LAX also took to the streets of Lagos to distribute giveaway boxes in honour of the release of his second studio album, Zaza Vibes. Some unsuspecting winners of this giveaway include a plantain chips hawker who got a box full of cash from LAX without selling him a single chip.

STILL SHARING BOXES . ZAZA VIBES OUT NOW AND WE ARE TAKING THE GIVE AWAY TO THE STREETS #MERRYCHRISTMAS 🇳🇬🇳🇬 pic.twitter.com/YeYwp9bxSP

Recall that sometime last month, LAX also took to social media to celebrate being inducted into the league of Lagos landlords after buying his own house.