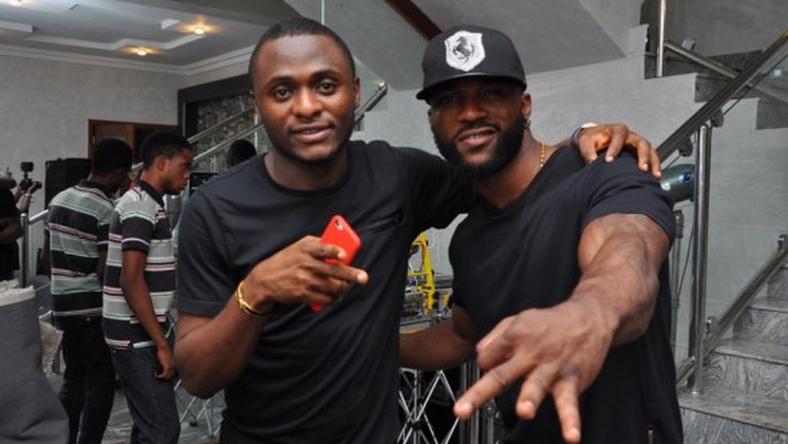 The saga between Nigerian singer, Iyanya and former manager and partner Ubi Franklin continues and this time, Ubi Franklin is back with his own side of the story which is more complicated and insightful, if those two words can be used together.

Ubi opened up in an interview with Dotun and Kemi Smallz on CoolFM’s The Midday Oasis where he stated that at the beginning of Made Men Music, Iyanya was not a partner because Iyanya clearly stated he didn’t want to have anything to do with the business side of the music initially but that position later changed when they were faced with a situation that required Iyanya name in the business.

We were sitting at the balcony in the apartment where I used to live, where I was squatting with somebody and Iyanya always comes there because the studio was closer… I said Okay I want to call the company a name, I said, Made Man Music, Emma Nyra now said, no, since you’re two guys and there’s Bassey and D’tunes, it should be Made Men Music… I turned, looked at Iyanya who was pressing his phone, I said we’ve found a name, let’s go do CAC, Iyanya looked at me and said clearly, I’m not interested. He said do company, as far as my music can go forward and everything, you can handle whatever you want to handle, I’m not interested in the company, I just want to sing. So there was a friend that introduced me to a lawyer his name is Obinna, he said Obinna should help me do the registration. You know then, company’s registration, if it’s not a lawyer, nobody can do it… Obinna got all the details, and this is the first CAC document that was registered. (He brought out a document signed, May 21st, 2012 that contrai9ned just his signature and his brothers’ whom he stated he had to fill up with because Iyanya wasn’t a part of the partnership deal).

He went on to state how Iyanya eventually became a part of it which was when they approached a lady who worked in at Access bank at that time and after they had a nice conversation together, they spoke to the woman later about a loan, Ubo specifically stated that he called the woman to ask for the possibility of a loan from her bank and the woman invited them for a conversation, stating that a loan is possible.

According to the Ubi, the lady, on seeing that Iyanya was not part of the deal, stated they would not be able to give him a loan because they do not know him (Ubi), but if Iyanya was a part of the company as partners, then they can get the loan and that was how Iyanya came on board as a partner and every other partner in the previous CAC form signed in May 21st, 2012 relinquished their own parts of their share to the company and that’s how they signed another CAC in September 2019.

“…We got back to Lagos, I contacted the lady #, I said ma I know you work in a bank, things have been tough for us, we’re trying to push Iyanya and everything, is it possible for your bank to give us a loan? She said sure… We went to their office in VI, we spoke to them and everything and she said can she site our CAC document, so I brought that (he said pointing to the CAC signed in May where Iyanya wasn’t a partner)… so when I presented the document, she now look at the document and found out that Iyanya’s name is not on the document and she said Ubi… if Iyanya’s name is not on this document we can’t give you a loan because it’s Iyanya we know. So I turned and looked at Iyanya, he put his head down… he knew he messed up at that time because this is business for us and I’ve always told him whenever I ask him to do something, let’s do it because it might not make sense now but it makes sense tomorrow. So she now said we should go back to CAC and rectify the document. So we went back to CAC in September and got new documents… so Iyanya was not in the document for at least six months.

According to the partnership, Iyanya gets 50 percent from whatever business the label does and he also stated that Freda Francis was the person who them the security for the loan they got from Access bank.

On If the 50 percent applied to Iyanya’s music, Ubi said no, that the partnership is different from his management contract which is 70/30; Iyanya gets 70 percent and he gets 30 percent.

On forging Iyanya’s signature, Ubi said, “I’ve never ever forged anybody’s signature, I come from a proper legal background and those that know me know I was sent to school to read law, so I know the legal implications of forgery… forgery is the easiest way to go to jail.

On Iyanya hating Tekno, he reaffirmed his stance, stating that Iyanya did hate Tekno by first disagreeing to sign Tekno and then talking about the issue they had about where they lived and who stays in what position.

Speaking on what Iyanya made from the Tekno’s career which was one of the major issues, Ubi from everything said, believed Iyanya was not entitled to anything from Tekno’s career because he didn’t invest anything in Tekno, irrespective of the fact that Iyanya was a partner with fifty percent benefit. He also stated that he had accrued debt from trying to push Tekno’s career hence there wasn’t much that ended up with him eventually because he also had to give Tekno his share. But after Paulo’s intervention, they started splitting proceeds from Made Men Music Group at the 50/50 initial share

On parting ways and selling out, Ubi confirmed Iyanya’s statement, stating that Iyanya did relinquish his shares to Ubi while going off to another record label with no money exchanging hands and there was also no money in the label as at that time.

To summarize all that has been said, Ubi did not split the money with Iyanya because he already said he wasn’t going to be part of the business initially and he was also the dormant partner in the business. In terms of making just 145,000 from Tekno’s deal, Ubi said there was lot more money than that after the 145,000 naira, they met with Paulo and sorted everything and it became 50/50 afterward. and finally, Ubi agreed that Iyanya relinquished his part of the share and moved on even after trying hard to convince the Kukere singer to still stay with him.

Giving his final words, Ubi stated he never intended for himself and Iyanya to have an issue that’ll bring them out this way because Iyanya’s success is one that’s personal to him, but some issues needed clarification and he’s ready to clear his name.