"Is This One Assurance Wizkid Edition?" Twitter Reaction To Wizkid's Fever Video

Finally, Wizkid has released the video for his new single, Fever and just as Ovie promised, tongues will wag once the video goes public. Well, Nigerians didn't disappoint, tongues are already wagging and we know the people that take the lead live on Twitter street and their reactions are pouring in already.

The video features Nigerian singer, Tiwa Savage but this time, not as a singer but as a video vixen who played Wizkid's lover and the subject of Wizkid's attention in their passionate romantic display of affection for each other. While this is obviously a publicity stunt, many people still believe this smoke has plenty of real fire underneath. In plain terms, they're saying, Wizkid and Tiwa Savage truly do have something sexual going on despite all the denial.

This video is making the internet go wild with trends centred around either Wizkid, Tiwa Savage, TeeBillz, or Fever 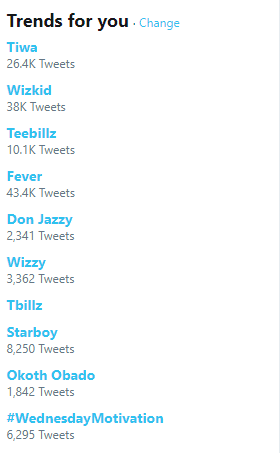 While this is a publicity stunt from the numbers, the reactions are too hilarious to let go as people state their conclusions after watching the video and some confusions with someone on Twitter, @Mareeeeam asking if this is Wizkid's version of Davido's Assurance, but most importantly, TBillz has been dragged into this because he once stated that Don Jazzy won't allow it... Oh well!

I don’t know why y’all trolling/shading Teebliz he said Wizkid is not knacking Tiwa , I guess what the young man is trying to tell us is Tiwa is the one knacking Wizkid?, y’all can see how Tiwa was ridding Wizkid in that video right ?

Obviously, Wizkid put Tiwa in the Fever video for the massive buzz and publicity.

But you can’t tell me nothing, they are knacking. If not, Tiwa should just kickstart her acting career properly because that intensive Vixen role deserves an Oscar.

"@iamsteveolaa: Wizkid is a bahd boy! See the way he is rocking Tiwa savage... And one silly man said Wizzy is his brother. I laugh in German??? pic.twitter.com/I70yB9SqX3

The Stew that Wizkid and Tiwa are sharing everywhere, can give Teebillz fever.

So much talk about the chemistry between Wizzy Wizkid and Tiwa Savage in this #fever video. You can see why... ? .

“But you said Tiwa doesn’t cook, have you seen Wizkid’s ‘Fever’ video?”

Lol pls when did Tiwa Savage become a video vixen?? or is this one assurance wizkid edition lmao

É calm down, Wizkid did not even kiss Tiwa in that video, y'all are overreacting. pic.twitter.com/YPQd3PMJH8

Just saw Tiwa and Wizkid’s Fever video. At 1st I thought Tiwa featured on the song but alas! She never sang.
The video intentional had Tiwa to cause controversy but the chemistry looked more than just being professional to me ??‍♀️
Donjazzy allowed ‘it’ and TeeBillz will be mad?? pic.twitter.com/2D9HqBadQP

This is the part of Wizkid #FeverVideo they didn't show us!!

I still dont think Wizkid & Tiwa are doing anything tho. Proper PR stunt to keep mouths talking & Teebillz added more fuel to the gist. Is there any bigger story that would sell more than the Biggest Male & Female Acts in Africa Romancing? Think Not!!!