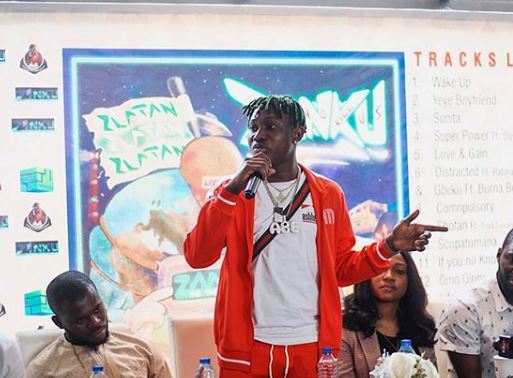 Zlatan At His Album Listening

Zlatan Ibile has revealed that he still cannot believe that he will be dropping his debut album in November as it is slated to be released.

The Nigerian street pop artiste, Zlatan, opened up at his album listening with the press on Thursday, 31st of October, 2019 in Lagos.

The album listening was an insightful experience for many who are coming in close contact with the star and hearing him talk for the very first time.

At the press conference, the singer and rapper talked briefly about his journey in the industry and the perception people have of him, which according to him is not the totality of who he is, but since he noticed that that perception was giving him the attention his career needed, he took it and he plans to gradually introduce people to the other kinds of music he makes.

This introduction, Zlatan will be making with his upcoming album which contains songs with deeper meaning than what we're used to with Zlatan. These songs are personal and also emotional for Zlatan as he reminisced through the hard time he had to face in his journey to becoming the star he presently is and how God came through for him.

Creating an album as an artist, Zlatan reveals is one of the most important things and even at the Album listening, the singer and rapper stated that he still couldn't believe that he has an album or that he is even in the position he's presently at.

Ever since I was a kid listening to Olamide, it has always been a dream, an album is a dream ... some people never get to do it while some find it hard to do it. I just did it like it was nothing. I was in America running my tour while my team were running helter-skelter working on sleepless nights ... I don't believe that the album is about to drop, I still don't know how everything happened, for real. I'm like I'm dropping a debut album, 17 tracks featuring Davido, Burna Boy, Tiwa Savage, so I wanna appreciate everyone who made it possible"

"Everytime I wake up in the morning i always feel like "am I still popping?..." Awwww!!! ? Please show some love to #Zlatan the #Zanku king ???????? #afrobeats #music #Notjustok