The street pop star, Zlatan Ibile has revealed that his life wasn't all that rosy before fame and things have been difficult for him for the longest time before now.

This revelation was made via Twitter where the singer reminded fans that his journey has been nothing short of one filled with grace, making him the perfect grass to grace story.

He also posted a photo of himself in 2014 as a 19-year-old who won his first car in a music competition organized by Nigerian based telecommunication company, Airtel.

‘Before I won this car, I do bricklayer, cut grass for people land to lay foundation, I work for cold-room for Ikorodu Isawo! 10k per month! I do too many many. But I thank God for my life today’. 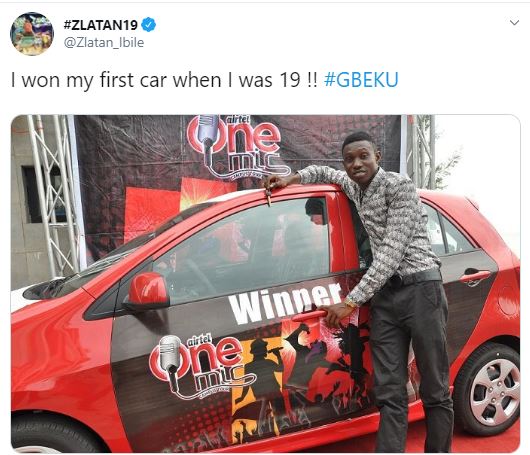 An observation of Zlatan Ibile's recent posts on his social media will give you a peep into the artiste's present disposition which is an almost constant reflection of his journey and that motivates him at every point to express his gratitude on how far he has come and this tweet is just one of them.