YBNL popstar singer and songwriter, Fireboy DML has told VULKAN Magazine in a recent chat that he truly believes he would be a regular guy if not for the studio.

Fireboy DML revealed he was featured on VULKAN Magazine via his Instagram page on Thursday, the 22nd of July 2021. He wrote;

flexed out for @vulkanmag. visit the link in their bio to read up on my interview. styling - @styledbyambika photography - @bokocecile 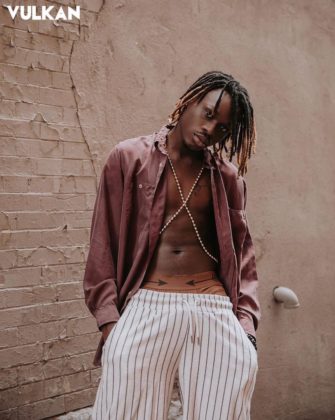 Speaking to VULKAN Magazine, Fireboy shared that his family wasn't that into music. It wasn't long after he started listening to artists like Elton John and Celine Dion before he started getting musically inclined. He also revealed that he was probably going to end up as a regular guy until one day when he entered the studio. In his words;

My life was probably going to end up as a regular guy’s life until I found myself in the studio one day and made my first song,” he opened up. “Since then it’s been music for me.

The singer also reveals that living in Lagos played a huge part in his sound;

Lagos is that city that never sleeps. There’s so much energy in that city. That’s where I found my sense of artwork.

Fireboy just released a new single, Peru, and has been dropping hints that he might be dropping his third studio album soon, also his third album in as many years.