Davido Reaches Out To Cynthia Morgan Despite Their History 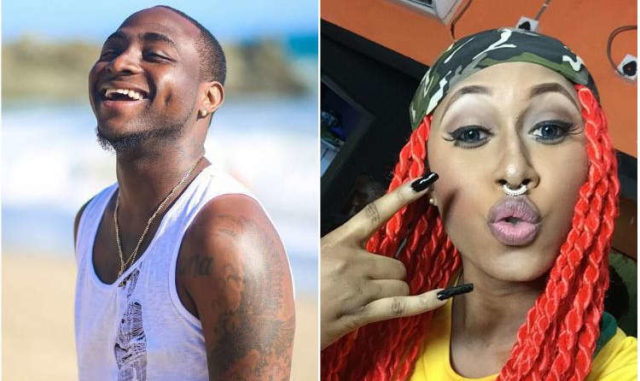 In light of the present issue between Cynthia Morgan and her former management, Nigerian superstar, Davido, who four years ago had a clash with the dancehall star has reached out to her on Twitter, asking that Cynthia Morgan now Mandarin Morgan call him. 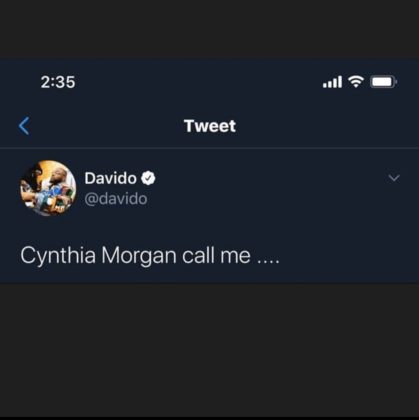 Earlier today, 24th of May 2019, social media had launched a gofundme account to bring Cynthia Morgan back into the industry. After that, Cynthia Morgan revealed that her career didn't take the leap it was bound to take because of her former management which was headed by Jude Okoye, the brother of the renowned defunct music group, Psquare.

The Instagram Live video was followed by tweets from Cynthia Morgan's former manager "Joy Tongo" who attacked Cynthia Morgan, telling her to say the truth. 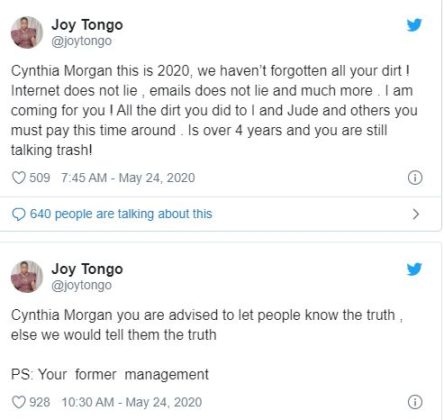 In light of this story, Davido has reached out to the dancehall star to, although not stated in his tweet, resuscitate her career.

In 2015, Davido had supported Lil Kesh winning Afrimma Award and that statement earned him a blast from Cynthis Morgan who referred to him as a fuck boy. Looking away from the issue of five years ago, Davido's tweet to help Cynthia Morgan is a great gesture but presently receiving mixed reactions on Twitter.

So I came across this old video of an Issue between Davido and Cynthia Morgan , I’m thinking that’s why Davido said “Cynthia Morgan call me” Meaning if you need me I’m here to help you.

While Twitter users are commending Davido for rising up to the occasion and living by his popular belief "We rise by Lifting others" despite their history, other reactions opine that Davido should've just reached out to the red hair superstar in private.

What do you think?