Nigerian singer, Davido has paid homage to his late friend and associate, Obama DMW by inscribing his nickname, "44" on his face cap in a recent photo. 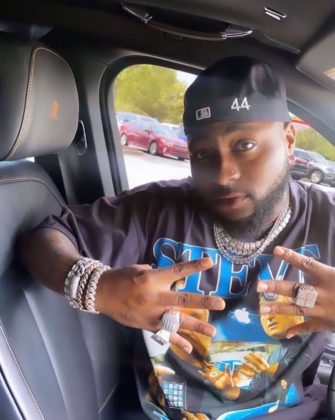 The singer was spotted wearing the cap in new photos shared via Instagram on Sunday, the 4th of July 2021. In the photos, Davido is seated in the front seat of his car, sporting a black face cap with the inscription, "44", the nickname of his late friend Obama DMW. He also put up four fingers from both of his hands to further emphasize what he was referring to.

Obama DMW was reported dead on Tuesday shortly after he complained of chest pain and drove himself to the hospital. We also brought you a throwback video of Davido telling Obama (fondly called 44) to stop smoking cigarettes.