Former US Secretary of State and military leader, Colin Powell, has died after complications from COVID-19. 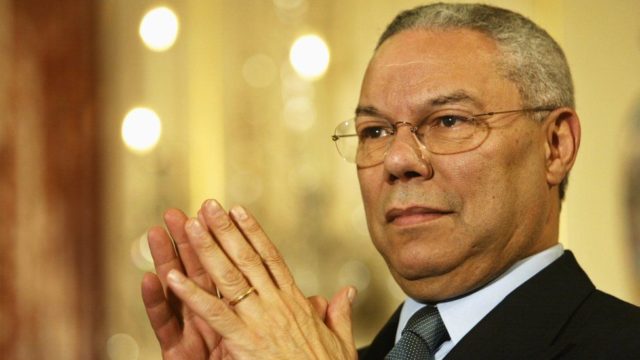 Former US Secretary of State and military leader, General Colin Luther Powell, has died after complications from COVID-19.

According to reports, the former diplomat and retired four-star general who served as the 65th United States Secretary of State from 2001 to 2005 died today on Monday, October 18th, 2021 at the age of 84.

According to reports, the late Powell's family made the announcement on Facebook. They wrote:

General Colin L. Powell, former U.S. Secretary of State and Chairman of the Joint Chiefs of Staff, passed away this morning due to complications from Covid 19,

We have lost a remarkable and loving husband, father, grandfather, and a great American.

They also stated that he was vaccinated.

In the Nigerian music space, Powell was popular for his foremost performance with Nigerian singer, songwriter and performer Olu Maintain.

The former general was addressing the crowd at the Royal Albert Hall in 2018 when Olu Maintain and a backup came up on stage to perform his smash hit 'Yahooze" and the late ex-US Secretary of State joined in the performance.

Powell is survived by his wife, Alma Vivian (Johnson) Powell, whom he married in 1962, as well as three children.