Nigerian superstar, Burna Boy has revealed that he plans to hold a stadium concert in the UK next year to raise money for struggling Africans.

Burna Boy revealed his plans to save the African continent with a stadium concert set to hold in the UK next year. He shared this via his Instagram stories on Thursday, the 4th of November 2021. 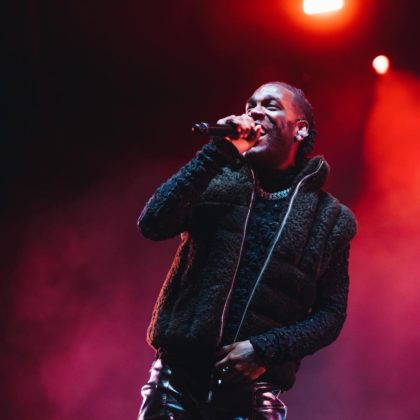 Earlier this year, Burna Boy staged his very first headline concert at the O2 arena in London and it was a blast. The singer was joined on stage at the O2 concert by singers like Rema, Omah Lay, Ruger, and King Promise of Ghana. Burna Boy himself gave fans a special experience when he arrived at the concert floating in on a spaceship.

Sharing his plans for the stadium concert in the UK next year, Burna Boy explained that he got the idea after watching the classic movie, Bohemian Rhapsody. He likened his idea to the Live Aid concept and called on the British government to lend their full support to the cause. In his words;

It's just a dream right now but I EXPECT THE BRITISH GOVERNMENT to support this fully. After all most of us are/were British colonies. 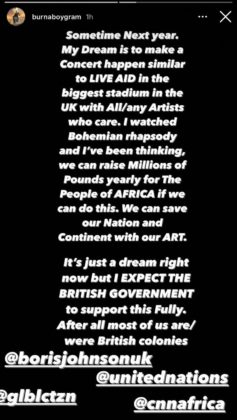