#BBNaija: Saskay Reveals Why She Did Not Believe Cross Liked Her | WATCH

Saskay has revealed that she did not believe Cross’ intentions for her in the BBNaija house were real because she wasn’t exactly his type.

Saskay told Ebuka during her official interview that she did not know Cross liked her in the BBNaija house until Peace told her about it. The interview was shared via Youtube on Monday, the 20th of September 2021. 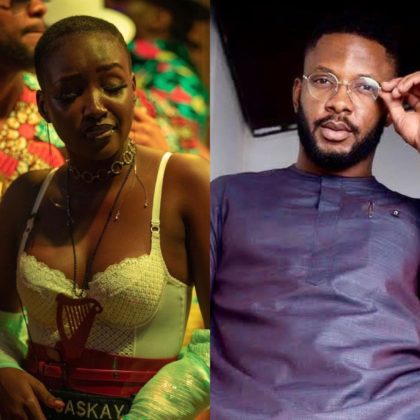 Saskay was evicted from the BBNaija house on Sunday along with Yousef as the show draws to a close in two weeks. She was involved in a love triangle with Cross and JayPaul at some point in the house. Although she did reveal that Yousef was actually the first person in the picture. Saskay says she fell for JayPaul because he was the one that she spent most of her time with.

READ ALSO: Saskay Has Been Evicted from #BBNaija Shine Ya Eye

Speaking to Ebuka a day after her BBNaija Eviction, Saskay reveals why she did not believe Cross’ intentions;

I didn’t believe Cross liked me. It was Peace who noticed it and brought it to my attention. I didn’t think Cross liked me because I felt his type of person wouldn’t like someone like me.