In the BBNaija house today, Big Brother gave the wildcards, Maria and Pere the chance to nominate the housemates they want up for eviction, and they did.

Maria and Pere nominated five of their fellow BBNaija housemates for eviction during the live show later on Sunday. The nomination show was done immediately after the Arena games on Monday, the 2nd of August 2021. 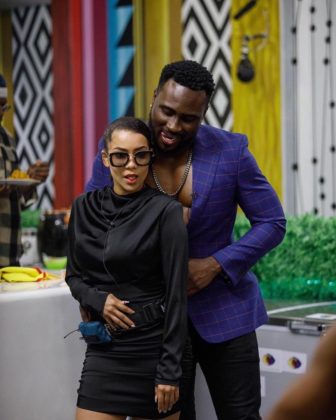 During the Arena Games, also known as the Head of House challenge, Boma recorded the highest points total with 26 points. He was subsequently crowned the HoH and picked Jackie B as his deputy.

Big Brother then tasked Maria and Pere with the task of nominating 4 each from their fellow BBNaija housemates for eviction. He gave them this privilege because they managed to keep their identity as wildcards hidden perfectly the previous week. Maria nominated Beatrice, Yerins, JayPaul, and WhiteMoney. Pere on his part had almost the same names on his list but nominated Niyi instead of JayPaul.

Hence, the five nominated housemates were Beatrice, Yerins, Niyi, JayPaul, and WhiteMoney. Boma's new position as HoH gave him veto power to save one housemate and replace him with another. He opted to save JayPaul and put up Yousef for nomination instead.