Watch Moment when Adekunle Gold Facetimes Simi During Link up with J. Cole

Nigerian singer, Simi has shared a video of her husband, Adekunle Gold Facetiming her when he was hanging out with American rapper, J. Cole.

Simi has always spoken about J. Cole as one of her favorite artists in the world and her excitement was evident in the video of her getting a Facetime from Adekunle Gold. The video was shared via her Instagram account on Tuesday, the 26th of October 2021. 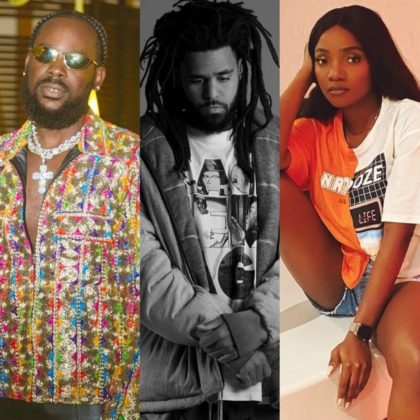 J. Cole is an American rapper with a very impressive discography and a huge following around the world. When he visited Nigerian for a concert in 2018, he expressed his surprise at how many people knew his songs word-for-word. They were even rapping along to the album he just released back then, KOD.

Simi is one of J. Cole's numerous fans in Nigeria and a staunch one at that as she was visibly excited in the video of Adekunle Gold calling her on Facetime. Sharing the video on her Instagram page, the singer wrote;

I almost passed out 😵 I'm still giddy. If you know you know. @realcoleworld the only person I'll probably ever fangirl for🥲. I was coherent for about 12% of the conversation and for that I congratulate myself.

And this is how you know AG Baby is my Baby.