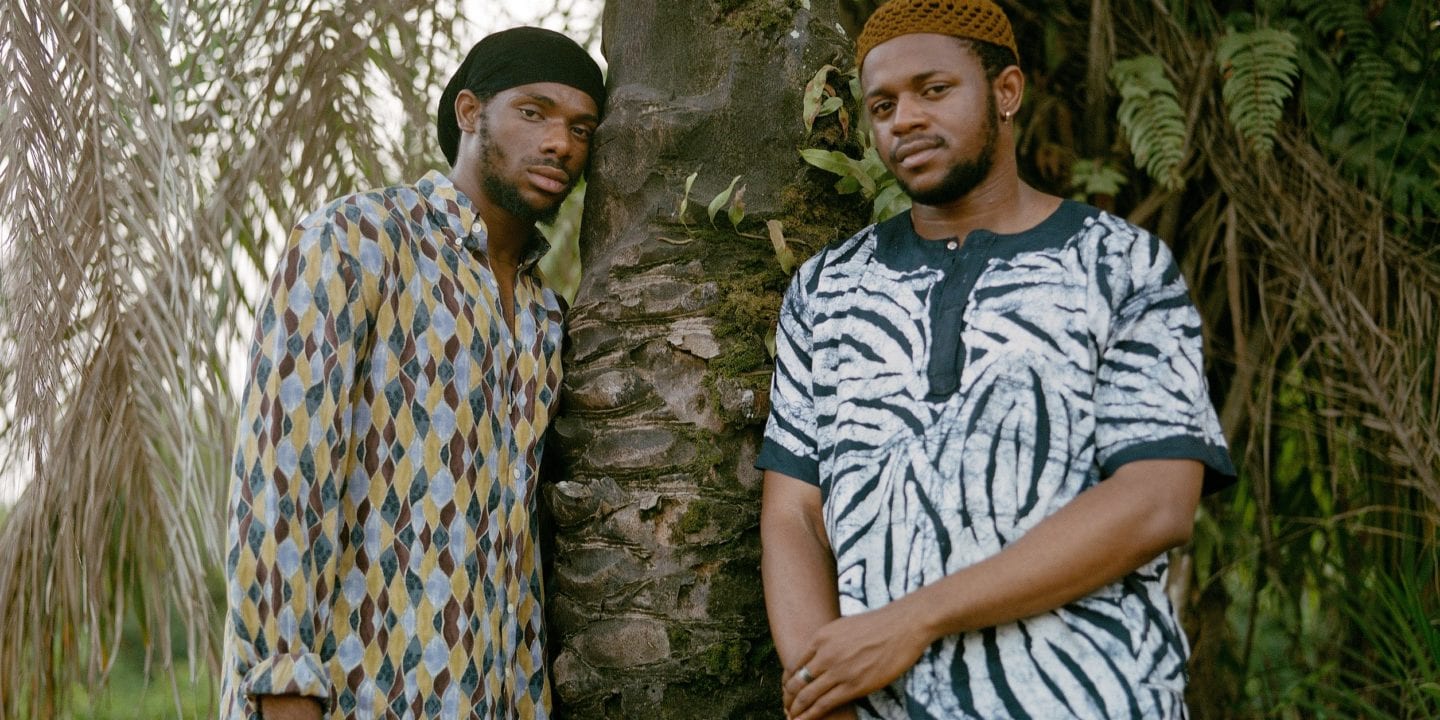 Come Inside The Cave And Feel Alright! 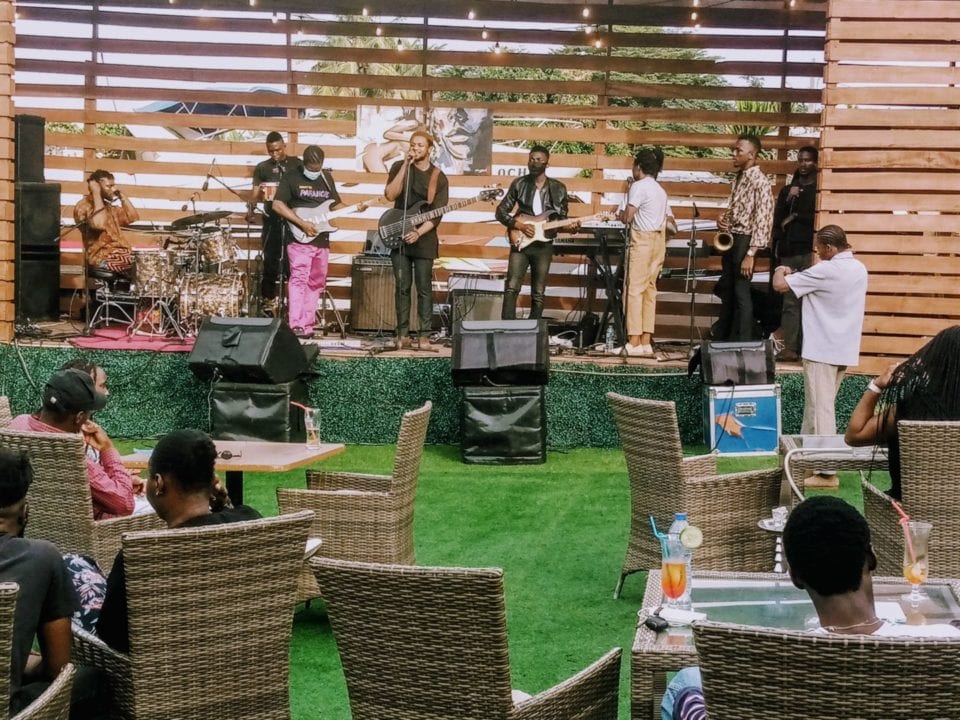 The Cavemen on stage at the Sea Lounge, Lekki | photo by Emmanuel Esomnofu

Hours after announcing tickets, the early birds category was sold out at the price of 3,000 naira. Days later the regular tickets, priced at 5000 naira, sold out too. For context, these are about the same prices tickets of more established artists go for. More context, when you realize most Nigerians are grappling with a harsh economy, and money such as the above isn't easily forked, especially not when it came to the arts. But The Cavemen., as you'll come to see, are special.

On Saturday September 12th, I left home to a gloomy weather. The clouds, thick with the foreboding of rain, drifted slowly. Hours later I was walking down a Lekki street, where The Cavemen. held their event, and I could feel a warmness wrap itself around me. Since the release of ROOTS, I hadn't played any album more. Their ambitious take on Highlife lifted me onto dizzying heights I shuffled gracefully when its songs played. “Akaraka” is a favorite, as every other record is, from the festive “Bolo Bolo” to the philosophical “Iro,” a message on enmity and how man's existential uncertainty demands it be zapped. “Anita” is named after a lover, featuring the album's most enchanting hook, a passioned scream of the lady's name. Later that evening, we'll give voice to that shriek which bordered on distress.

Started by the brothers Kingsley and Benjamin Okorie, The Cavemen. are a Highlife fusion band. They produced most songs off Lady Donli's Enjoy Your Life, engraving their sound on the album, one of my favorites from last year. With acclaim from working with alternative mainstays like Ms. Donli and Bez Idakula (who featured the duo on ‘Beauty,’ off The Light), they put out music to a niche but growing audience, patenting the seeds sown in previously mentioned songs. “Osondu,” their debut single, was riveting and communal, its message encapsulated in the lyric: “Mgbe I na-aga ije gi elekwala anya n’azu, ọsọndu” which translates to “When you’re going on your journey, don’t look back, run for your life.”

Existentialist themes such as one's destiny and the levity of life is one of the reasons why The Cavemen.'s Saturday event wore the feel of a moon eyed gathering of kinsmen. Connected as we are by one album –which, to its brilliance, relates us to our collective history as Nigerians and the mosaic quality of the Highlife genre which eased the pains of the Civil War and ushered in less gorier times– we screamed “Yeah!” when Kingsley, taking the front stage, asked if we'd listened to ROOTS.

The venue, Sea Lounge, looked eastwards to the water; seats were sparsely arranged to encourage social distancing; the soft green grass, which covered the floor, was cushion for those who sat earnestly and looked onto the stage. There, Kingsley, Benjamin (on the drums), and a band of about ten people set their instruments: microphones, flute, drums, percussive tools, trumpets, electric guitar, back up singers, and the likes. Good music was ready to be delivered.

“Yo, the ROOTS album has clocked a million streams!” Kingsley announced to the crowd who cheered enthusiastically. The space fitted what was perhaps a hundred guests and at the back, some made themselves comfortable, taking drinks and fast foods, smoking cigarettes. The disc jockey had been playing afro pop music –a choice which proved to be strategic and only served to the shivers sent down the spine when the familiar sounds from the cave trickled, then poured.

The first session had the band reel out some of their finest records. “Akaraka,” expectedly, boomed from speakers as excited guests sang word by word. Ebuka Obi-Uchendu, famous as BBNaija host, was one such guest, seated behind expensive bottles of alcohol and soda, and on his face spread a smile. Word has it that Genevieve Nnaji was present although I didn't see her. The movie star, like Ebuka, shared her love for the group when a video of her driving to a song on the album “Beautiful Rain” went on Instagram. Talent manager Godwin Tom, now organizing a class for music business enthusiasts, sat alongside Mr. Uchendu, both men giving an aura of friends reconnecting over an old favorite. I overheard the latter ask which sibling was Benjamin, the admiration for this rare beautiful artistic ingenuity obvious in the outstretched finger, the warm smile.

Prince Nico Mbarga was born in 1950 to a Nigerian mother and a Cameroonian father. The Melody Orchestra, a hotel band, was his debut as a member of any group, in 1970. Best known for “Sweet Mother,” one of the continent's most famous songs ever, Mbarga however evolved a pristine style made possible by an eclectic mix of Nigerian and Congolese guitars fused into Highlife.

The Cavemen.'s performance of “Bena” was preceded by announcing its sound was influenced by Prince Nico Mbarga, dubbed an ‘ancestor.’ ‘Oh, oh, Bena leave me go,’ goes the chorus of the record set to an earthy beat which, sounding the most like a 70s tune, powers the homage. When you thought the excitement couldn't exceed its current level, they launch into a rendition of Michael Jackson's ‘You Gotta Be Starting Something,’ whipped into a Highlife rhythm and, as bodies exploded in dance, staged a return of “Bena,” alternating the song's refrain with Jackson's ‘Yeah, yeah.’

It's one of the more brilliant moments in a night filled with them. Benjamin's vocal presence, light and focused, was a crowd favorite, erupting into cheers when he threw his head forward to sing a sustained note or shriek. When he leaned back, it was to hit the drums like one possessed by music-inclined goddesses of the Victor Uwaifo era. “Bolo Bolo,” subtitled ‘Happiness in the Cave,’ scattered the floor and was performed across both sets thrice, the last of those coming late at night, bursting from an upbeat song about ‘coming together to be as one.’ J'Dess, the singer whose voice serenades on “Crazy Lover” and the ‘show me how to love’ refrain of album closer “Onye Ma Uche” also got fan love, especially from the ladies.

Expectedly, The Cavemen. performed all the songs off ROOTS, each bit scintillating. The music industry is famous for its emphasis on deliberation which, truly, runs the mile as much as quality of music, and it's exciting that The Cavemen. and Freeme Music, their handlers, has both on lock. It's expected they'll go on a promo tour around the country and especially in the South East, where their sound has its roots. Merch was on sale at Saturday's event: shirts, pins, etc. Kingsley wore a brown knitted kufi hat and a few guests did too, an instance of branding phased into the name even as the music works its angle. Already, The Cavemen. is one of the most ingenious name anyone could think up for an alternative Highlife group. Above the venue, on a billboard which towers Lekki and in the sight of the thousands who drive that bridge, a green hued promotional was placed announcing that day's event. It was gracious. It was poetic. But more appropriately, it was strategy meeting great sound, and you can't be mad at that.

Around 8PM the show eased to an end. Before then, the genius, guitarist Nsikak, made an appearance, taking the stage and reaching for the electric guitar like a man certain of purpose. A week ago, he'd collaborated with rap duo Show Dem Camp and The Cavemen. on the stirring “Dance For Me.” When the band bowed out for the second and final time, the disc jockey took over, promising elite gbedu and delivering with Burna Boy's “Onyeka” and, when the first drops of water poured from the night sky, a familiar sequence of ominous strings and hi hats played: “Beautiful Rain.” Hands went up in appreciation and prayer, asking the world be cleansed of evil. I stay within that magic of water and sound for some minutes before I leave. Out on the street, a warm feeling wraps me. These hours have been some of my best since the start of the year. Back at the event, a young man had excitedly said to his friend, “Mehn, these guys are magical!” to which the other person concurred, in his words, “an experience.”

While The Cavemen. are still serving niche bases (ninety percent of the people present on Saturday were young people), I have no doubt, after seeing them live for the first time, that they will fulfil purpose and take Highlife not just to myriad corners of Africa, but the world, in all its expanse and great desire for the simply special. 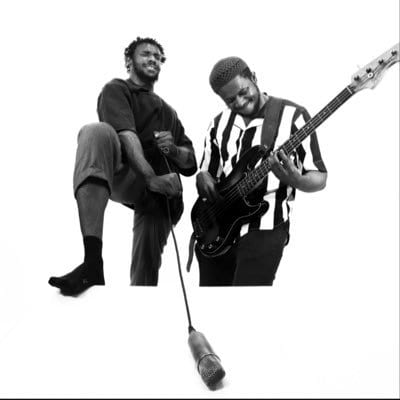 wow! this is a nice one. i hope to see more of this