Wizkid's 'Superstar' Is 9: Here's How The Album Influenced A Generation

An Overview: Wizkid's 'Superstar' Is 9: Here's How The Album Influenced A Generation

In 2011, when Wizkid's studio debut Superstar was released, I'd just, along with my seven siblings and parents, moved into Ajegunle. It held a new life for us, especially I and my immediate elder brother, who'd take in its reality like a wondrous 3-course meal. We took it in hurriedly, but not so quick as to strip it the unfamiliar of its exciting mystery. While my brother turned to the community in direct ways, making friends and hanging out at game spots, I turned to music.

And Nigerian Pop ranked very highly on preferences. Sure, I was obsessed with 2Pac and probably read every conspiracy theory on him being alive and in Cuba, but I couldn't escape the vibrant pulse of Lagos's music. The sheer brilliance of an M.I song, or the addictive sweetness of a Wizkid jam. ‘Holla At Your Boy,’ the song which introduced him to most Nigerians, was, as the theme tarried, shot in a school. It was loved by all, especially people like me: School students. In school, desks were banged and plates hit. Someone, wearing his best Wizkid impression (which included rubbing one's palms and licking lips), would begin to sing. And we'd all explode into excited kids. Those were fun times.

In 2020, Wizkid still lives here, in this heart. It's been 9 years, and a lot has happened since then. Superstar has aged finely, and Wizkid is a global phenomenon nowadays. We can't claim him for ourselves as viciously as we once did. But his impact, built on the massively successful Superstar, is everlasting.

Discussing Wizkid, one needs to take the name into consideration. The dictionary gives the meaning as a brilliant or accomplished young person, which was exactly as we all saw ourselves. It was a direct order to slay. When we attached the name to a face, it made even more sense. Smooth, joyful, and young –especially young. The emergence of Wizkid marked, for the first time in popular Nigerian music, the presence of a young person thrust into the thick of its culture. A lot was possible for Ajegunle youths and my classmates because Wizkid was doing it. He was rocking branded shirts, colorful sun shades, and was hanging out with pretty girls. Even a teacher wanted some of that spice! You see, the physical appearance –small, lively– meant he looked more like us than, say, a P Square, the toast of older Nigerians, our parents even.

Wizkid was ours. And nothing wields that power more than his voice, a tinny element which soared above beats by revered producers –Masterkraft, E Kelly, Samklef, etc. His voice was an embodiment for the often employed paradox “Small but mighty.” He left beats in his wake, and his talent was visible. Heavily borrowing from Wande Coal's approach to fusing written content and off-the-top lyrics to attain a freshness to every studio session, Wizkid further learned a vital skill: That of call and response. In some way, the power of Superstar rests on this. When you picture 2011 Wizkid, more often than not, it's with a microphone in hand. Screaming a line to the crowd, and getting a response. The phrases “Oya ask your mummy,” “If you see me drive by,” “Oya, Funke,” and “See you sitting at the corner” were followed with a crowd response. A gesture which said: I'm yours and you're mine. 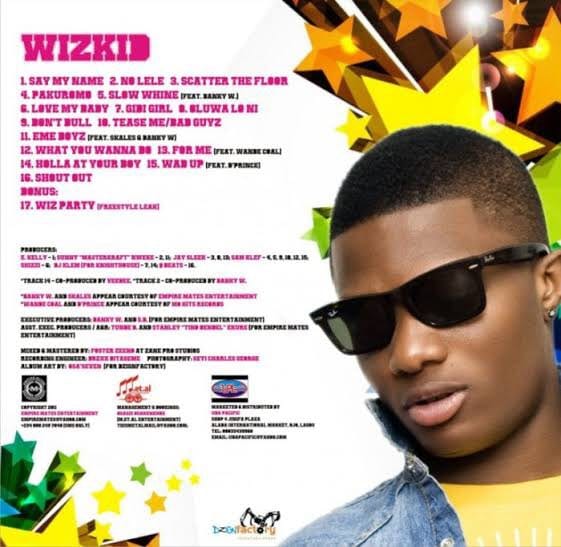 Made in Lagos, Wizkid's near-mythical album title, is expected to be released this year. If it sees the light of day, it'll become his third album, after Superstar (2011) and Ayo (2014); Sounds From The Other Side, released in 2017, had 12 songs but its creator calls it an EP. These three works, along with Soundman Vol. 1 (2019), has seen Wizkid evolve with the times. As the flag bearer for his generation, Wizkid has had to bear the challenge of legacy. His every move is questioned, even though he's never far away from a hit. It's however worthy to put two things in perspective; especially today, as Superstar turns 9 and nostalgia forces us to a period when Wizkid belonged to us; when he would beg fans to be patient for a new song and actually release it.

1. Wizkid, with all the years he's given us, owes us nothing (though I really want that album) and

2. The man's a legend, and that is even more visible considering the new artists who swears by his influence –Crayon, Rema, Terri, Omah Lay, etc. A case could be made for how Wizkid's vocal technique, as demonstrated across Superstar's 17 songs, has been adopted and adapted over the years, by artists who, themselves, grew up on that stellar album and hold its tenets as truth.

Here's to 9 years of greatness.