Wizkid x YouTube Live Show: A Free For All Yet Priceless Experience

When Wizkid announced his collaboration with YouTube on his Twitter during his #AskWizkid Q&A, many had decided to take it with a pinch of salt by virtue of his teasing nature. But as the days drew closer to the 19th, it began to take more shape, from YouTube posting a trailer tagged ‘A Day in The Live of Wizkid’ to Wiz himself posting up on his socials. 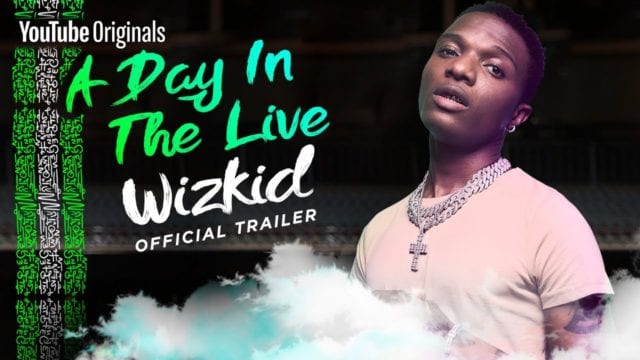 Finally the very day and the hour came, fans had been waiting excitedly in the reserved spot, sending hundreds of comments in per minute; this was a chance for them to see Wizkid the enigma up close like never before, a rare gift in these troubled times.

‘A Day in the Live of Wizkid’ was a three-hour long live event where Wizkid was livestreamed from making music on the spot, to being a doting dad, a caring team lead and superstar, and then Wizkid the show maestro.

Then enter Wizkid into the live show arena decked in all black leather outfit down to a pair of black mules. An outfit which quietly elucidated his laid back yet legendary status.

RELATED POST: "All my biggest hits I recorded sitting down..." - Wizkid Reveals

Like a boxer assured of victory, Wizkid walked coolly onto the stage just as the opening chords of ‘Smile’ started to play. Prior to this, the stage had already come alive with a projection of the geometric mural for the ‘Made in Lagos’ album art while a voice over recited a poem in honour of Lagos.

Then Wizkid took the stage and the serenade began with lines from his  songs which smoothly found footing above the well-coordinated instrumentalisation from the band and the backup vocals. And in no time, the remote audience instinctively do as Wizkid instructed earlier and settle into the experience.

A lot of adjectives must have run through the minds of the millions of watchers, but I daresay, very few would have been negative if at all. Reason being how the chemistry between the band, Wizkid and the backup singer was frictionless, it painted an imagery of well oiled cogs, etching new meanings and bonds for the Wizkid songs we already love.

Subsequently, the tempo of the performance picked up in a fluid way that heightened the experience. It was a fluidity of transitions such that the change from Skepta featured ‘Bad Energy’ to ‘Longtime’ and from ‘Joro’ to ‘Soco’ and then ‘Ghetto Love’, can be likened to a generator to NEPA changeover that doesn’t disrupt the TV.

Looking back, one might recall how several people were of the opinion that ‘Made in Lagos’ belied its vibe, however, yesterday’s performance will serve to banish that notion. This is due to the soothing rendition which provided the very calm and tranquility that Lagosians and Nigeriand in general hope for.

‘Made in Lagos’ is Wizkid’s love letter to his birth city and country. And even during the performance, he didn’t fail to wear his sleeve on his heart as the projector not only spoke volumes about the #EndSARS movement but was vocally projected in his remixed version of Ojuelegba that chronicled the harrowing stories of police brutality.

The Wizkid, YouTube live performance was practically an hour long but for many viewers, it was an experience of a lifetime brought to them at a time of utmost uncertainty and chaos. And while not everyone might be a fan of live performances, Wizkid’s pristine show surely secured a hatrick by refuelling his fans’ love for him, making new converts of some members of the audience while reaffirming that even 10 years down the line, 'Wizkid' is synonymous to ‘Starboy.’