Davido might seem unperturbed but this a problem. It threatens to undermine his somewhat revolutionary inclusion of songwriters on A Good Time. The Peruzzi Saga, one which has been news for some time now is, of course, about contractual agreements.

Nigerian artists seldom stay for a long period at their first record label. With a stream of underground hits and relative buzz comes the need for a "step up." For Tobechukwu Melvin Okafor (Peruzzi), validation came by way of a meeting with Davido. The origin story goes thus: Chioma Rowland, a distant cousin of Peruzzi, had contacted the artiste. As understood, the artist was then signed to Goldenboy Entertainment. Ms. Chioma, who would later become Davido's fiancée told Peruzzi that her celebrity boyfriend liked a song of his. They met at a lounge, and things went on from there.

Since then Chioma and Davido are engaged, and Peruzzi has become Davido's most important wingman. As a songwriter, his pen relies on the power of love, its ability to move the body and sweeten the soul. Peruzzi's songs thrive within these and has won him a cult of followers who've sworn allegiance to his music. They proclaim him underrated, and this makes a credible statement, seeing how big the songs he wrote for Davido became. With obvious musical chemistry, the duo has worked closely on a number of songs and projects; many credit Peruzzi with having a large influence on Davido's songs ever since he came aboard the DMW ship.

Last week, with a 17-tweet thread, came a series of controversial information that could have rocked that ship. Patrick Anyaene, the CEO of Goldenboy Entertainment streamlined an account that ended in how he felt sad "depressed" when Davido, who promised 20% for his artiste (Peruzzi) has failed to honor his words. Clearly pained, Patrick wrote of how he met Peruzzi and the circumstances which led to his signing. Patrick invested in Peruzzi, helping out in a family issue. "He was like a brother to me," Patrick wrote on his Twitter handle (@King Patrick GB). Fast forward, Davido signs Peruzzi to DMW, with pictures circulating at the time from social media to everywhere else. On his exposé Twitter thread, Patrick alludes to the Rudeboy-coined term and as it was, Peruzzi was "audio signed" by Davido because he was still under a Goldenboy Entertainment contract.

1. While they are delaying this case in court, I have also brought it here for Twitter to see my reward for helping @Peruzzi_VIBES
Be the judge and ask yourself if this is fair. #SurvivingPeruzzi

Peruzzi has responded. Davido, too. Mayorkun posted memes of him supposedly saying some things to Davido. This (Mayorkun's memes) typifies the trendy medium for such exposition; within social media, memes spark conversation.

It is also the medium that has driven this particular conversation forward. One asks: what happens to journalistic objectivity, surely the one way to get the facts amidst the clutter? With both parties posing to be right, this is where the good old investigative feature comes in. (This is why rather than leaning towards being an opinion piece, this essay remains unassuming.) The writer Joey Akan took a shot at so-called journalists, saying that a story was in front of them, but they'd rather jump at writing reviews and their opinion pieces. Truth is, he's right, but only to an extent. The Peruzzi Saga escalated the way it has done plays to the spirit of the time, that which favors the instantly exciting over the meticulous rigor of, say, going through a 5000-word article.

That article, if written, would likely not feature Patrick's anger-fueled comment which suggested that she Chioma wasn't Peruzzi's cousin as reported. This assumed a life of its own. That Chioma is casually hurled into this money tussle between men also plays to the bias of women in Nigerian entertainment circles. Even though at best it was speculation, Patrick's suggestion quickly built a world around itself.

Such spontaneity belies the "gbas gbos" nature of social media spaces: you hit, I hit back, even harder. At these levels, the truth isn't a priority. The more entertaining, the better a report's chances at being considered true. At the time The Peruzzi Saga trended, I was offline. Some two days later, when I got back to that great world of Twitter, I was lost. I followed the retweets and the tweets; with the threads and counter threads, I sought to fashion some cohesiveness out of it all, but the noise was too much, the information so personal, condensed, and popularity-influenced. It was a tedious exercise if one sought an objective understanding of the situation on the social media platform.

You spent 48 Million on the guy you signed before me. That was a failure. You no drag am. Why?
Offered to send you your money, you said you wanted to collect the money before you sign the agreement. Who does that? So that you’d turn Richard Branson and start telling stories?

Going by the first tweet in Patrick's thread, the case is being delayed in court. When that hearing happens, there's no doubt that it wouldn't reach the heights this initial exposé attained, which was propped by the subplots. And it is unfortunate because while sacrificing reporting for entertainment, much of the general populace will go ahead with their lives, without knowing that many Nigerian artistes are responsible for falling out with their record labels. They will keep on stanning the makers of their favorite songs and shaming a Kemi Olunyolo (who came up with a Twitter thread supporting Patrick's demand for royalties). There's a chance Peruzzi and DMW aren't guilty in all this but most times, they are. Going by the trend of legal issues between artists and their labels, a conclusion to be arrived at –when one has listened critically– is that artists casually flout contractual agreements. 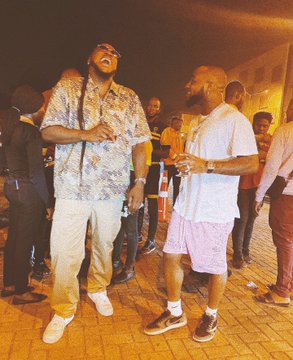 Davido has remained reserved, yet mildly confrontational by releasing a song which seemed to address some part of the controversy. He's also appeared on a photo with Peruzzi, atop a fancy white car. The notoriety of this news item has prompted other DMW artists to make publicity out of it. Mayorkun has been on about a "geng" thing, Peruzzi is promoting a forthcoming single, "Gunshot." Clearly, in this case, no publicity is bad publicity. That is the factual takeaway from this, that as traditional forms of reportage bow to social media, there could be a win for everyone, even the loser within a law court's four walls.