The History of Burna Boy and Davido’s Beef Broken Down

Once upon a time of budding careers and industry break out strides, Burna Boy and Davido were friends, with the latter appearing on Trumpet, a song off the former’s debut project-- Burn Series Vol. 1 and the former, the video of the latter’s breakout hit-- Dami Duro. That relationship has since become a thing of the past as they both make headlines as feuding artistes. While no one is certain of the reason why their relationship soured, here’s a timeline of their feud from the very first time we all got wind of it. 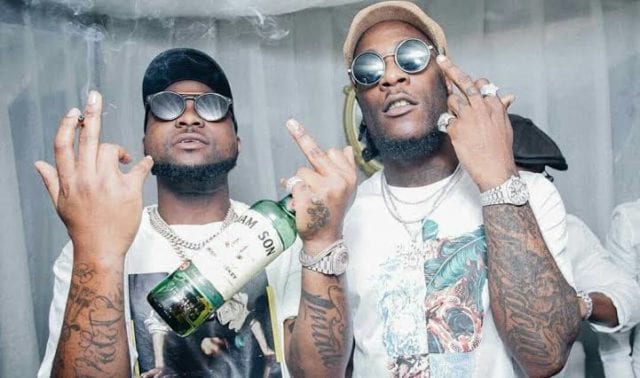 Burna Boy and Davido before their feud

After Burna Boy’s first Grammy nomination failed to yield the award in early February, he’d gone lowkey for a while but resurfaced two days later to have a rant when a Twitter user had basically said he wasn’t deserving of the heights he’d reached. Burna Boy had then responded by stating that he’d made all his strides on his own, saying no one paved the way for him. He also made mention of having people show him support while being jealous of him.

All this while, he and Davido were still on good terms and Davido had tweeted a consolatory message to him. Coincidentally, it was two days after the Grammys.

Things began to snowball into a messy affair from here on when sometime in May, Davido announced the coming of his second studio album, A Good Time which was to be released July. A shady comment had emanated from Burna Boy who simply posted on his Snapchat, the sentence; “JULY will be very funny, and I shall laugh accordingly.” Fans and music lovers then put one plus one together to reach the conclusion that Burna Boy was shading Davido.

After this, the next power play took place in camp Davido when he posted a picture of him beside Wizkid where with photoshop, they’d been re-imagined as native doctors. He put up the picture with the caption “The 2 greatest of all time! No cap” and had also given the creator a sum of N1m.

Later on, in an interview with Ebuka Obi-Uchendu, Davido will open up to say that a source from Burna Boy’s camp had mentioned that it was this post that had angered Burna Boy. However, the shading from Burna Boy hadn't begun from there.

2. The second Wave of War

After Davido had played this hand, probably good naturedly, Burna Boy had proceeded to let out an onslaught of even more shade which despite not mentioning any names, seemed like an attack at Davido’s wealth and rise to fame. Still making use of Snapchat, Burna Boy had said; “you cannot play football, everybody knows you cannot play football and you are an embarrassment to the team. But your daddy bought the football team.”

This message had placed the two artistes on the trend table and set their individual fanbases at each other as they took it as a declaration of war.

Diss tracks have always been part and parcel of the music industry so it came as no surprise when track three on Burna Boy’s Twice as Tall album, saw him describing himself as way too big and stating several reasons why. It sounded like a self-assured address to the industry in general and then some.

However in early September when Davido had made a comeback to social media and the public eye on the heels of the smash hit, Fem which is an onomatopoeic word for ‘shut up,’ lines like ‘Tell Odogwu say we like to party’ delivered the song right at Burna Boy’s doorstep. It was a doubly packed line as for one, Burna Boy had a single titled Odogwu and had since adopted the praise name and secondly, Like to Party was Burna Boy’s breakout hit.

Despite the seeming provocative nature of the lyrics, in the earlier mentioned interview with Ebuka, Davido had brokered peace and good vibes as he explained that line to mean that he was telling Burna Boy to call him up so they could air their issues.

Following Davido’s unveiling of the tracklist of his latest album, A Better Time, Burna Boy’s Twitter fingers had come alive to put two words together to simply say; ‘Floppy Disk.’ These words came two days after the unveiling of said playlist and there was once again speculation that this statement was aimed at Davido. But we didn’t have to guess for too long as Davido himself referenced Burna Boy’s tweet when asked about the reception of his album, stating that it had proven to not be a floppy disk.

We are currently amidst a geographic paradigm shift where Ghana is slowly becoming the West African holiday hub, whereas it used to be Lagos-- the tacit creative hub of the continent. As a result, several stars, Nigerian-birthed ones inclusive, have begun to troop there come the festive season. This year like the last, the Odogwu made an appearance in Ghana. Last year, his visits had depicted peace, and this year seemed to be going accordingly as well. It however deviated as it became a literal hotspot when the 30BG huncho decided to make it make it his spot too and in his usual manner, do it with a lot of pomp and fanfare. He also recruited some star power as well as we saw him wing-manning with Ghanaian dancehall favourite, Stonebwoy. It's worthy to note that Burna Boy had also been seen, via social media receipts from mainly third party sources, kicking it with the starboy, Wizkid and his rapper girlfriend, Stefflon Don.

For Davido, who'd dropped relatively just dropped his album, A Better Time, he'd then held a singalong in the club. Naturally, he also carried fans along via his social media, regaling them with his antics and his bubbling persona. The next virtual receipts we were next fed was that of an angry looking Davido seemingly being cajoled out of the club amidst a large crowd of people who were most likely his crew members and hanger ons. There was no Stonebwoy insight. A differently angled receipt of that same moment would also picture Wizkid, swigging sanguinely out of a liquor bottle. There was also no Burna Boy insight.

Word is that Burna Boy and Davido had fought in the club reason being that Davido had monopolised the DJ and stopped other artistes from performing. Davido had then angrily stormed out, but there has been no actual footage of the exact incident and only the heated one-sided incident with Davido. The management of Twist Club which is in the vicinity of the action has since come out to debunk having any links with said action which they neither confirmed or denied happening. Meanwhile stating that security personnel had prevented an escalation of incidence.

The next point of action after this was from Davido who apparently in low spirits, tweeted; "I go soon leave music for una." He also later acknowledged being bullied when he retweeted a tweet in which the author sympathised with him, citing his wealth as the reason he was being picked on.

Everyone knows this is the truth !!! 10 years I been fighting this shit ! But I swear nobody go see me finish again !! I WILL CONTINUE TO DELIVER YOU GUYS HITS!!!! TULE!!!!! https://t.co/kIFNN1nDSV

This drew different shades of reactions from different people the internet over but in camp Burna, the Odogwu showed himself to be unfazed and unbothered.

Perhaps in the same vein of competitiveness that has tanked and birthed the feud, the omo baba olowo has since gone on a loud and proud ride with his fans in tow.

Some parties also believe the origin of the feud to be Burna Boy's refusal to credit Peruzzi for co-songwriting his summer- ambient banger, Pull Up, but he however once gave him props for once helping him write a song without specifying which.

As music fans remain at a loss for the reason behind the feud, some other observers attempt to prove that it is a social media hoax geared at eking the two megastars more elbow room at the music supremacy table. Meanwhile, another school of thought peg Davido's casting on the prequel of Eddie Murphy's Coming 2 America to be the actual bee in Burna Boy's bonnet. Word of this first got out sometime in 2019 when comedian Michael Blackson congratulated the OBO in a now-deleted tweet and this correlates with the timeline.

But the reason behind their feud remains a closely watched mystery.