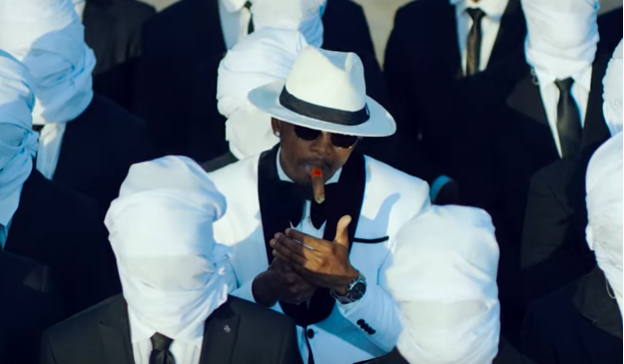 Tanzanian superstar Diamond Platnumz has been embroiled in controversy yet again. This time, it is a nuanced issue: appropriation.

Advertisements
Music is a universal artistic medium, one which transcends border and any language . Fela formed the basis of his Afrobeats sound from Jazz and Funk, of which the latter was championed in America in the 60s by James Brown. In reciprocity, Brown's latter music was influenced by the sounds of Africa, particularly Fela's. During a tour, he even visited Fela's famous Shrine. It was communal. A diasporan relationship between two black artistes of different nationalities, flung apart by the cruelty which was the slave trade.
This, however, wouldn't be termed "cultural appropriation". It was a humble attempt to learn about a foreign culture. James Brown was, by virtue of his funk, drawn to the electric qualities of Fela's Afrobeats. And, for that artistic integrity, Brown's own music went largely unquestioned.

What Is Cultural Appropriation?

According to Wikipedia, this:
"Cultural appropriation, at times also phrased cultural misappropriation is the adoption of elements of one culture by members of another culture. This can be controversial when members of a dominant culture appropriate from disadvantaged minority cultures.
Cultural appropriation is considered harmful by many, and to be a violation of the collective intellectual property rights..."
It is on this premise that Diamond Platnumz is adjudged guilty. As listeners have declared, surely after several listens, his song, "Baba Lao," is a brutal rip-off of Nigerian artiste, Naira Marley's song "Soapy". It is his latest song following the release of "Penseli".
The song is immensely popular in Nigeria. Several months after its release, it still dominates the streets and clubs. One could say Naira Marley consolidated on his arrest by releasing the song, a brutal depiction of life behind bars, and the sexual orientation that goes with it. The song, an upbeat tempo driven on the vehicle of rolling drums, is produced by Rexxie. It is a sound credited to the streets as a collective, a Fuji-inspired sound which is otherwise a contemporary of "Sheteperi," that which birthed the "Shaku Shaku" rave.
Diamond Platnumz is a popular artiste in Nigeria. His Davido collaboration on "Number One" introduced him to the nation, and they've embraced him ever since. He's collaborated with several Nigerian artistes, and there are more forthcoming. That he chooses to appropriate not just a lyric, but the beat structure and the cadence of Marley's delivery feels like a betrayal. Shameless. It sells him as a culture vulture of some sorts. Were a statement released alongside the song, noting the Naira Marley influence ("influence" feels too soft a word), this piece wouldn't exist.
Interestingly, this isn't the first time Diamond Platnumz has been involved in such controversy`. He was accused of featuring strong elements of a song from Namibian singer King TeeDee on his own song, "The One". However, nothing materialized out of that, seeing as there was little by way of hard evidence.
On the defensive, one of the song's producers, S2Kizzy, claimed they had communicated with Naira Marley prior to release. “We started making the song a long time ago when we went to Madagascar," he said, speaking to Wasafi Media. "We wanted an African beat, then Naira Marley’s song started playing at a certain TV channel. We liked the vibe. We were inspired by his beat and put our own vibe."
The producer will do well to know that Diamond Platnumz has appropriated Nigerian culture before. Most notable, the Shaku Shaku on several of his dance-reliant visuals. However, where he fails to understand the force of the backlash received is this: "Soapy" is a victory of the streets, and jacking off its sound and song structure without prior announcement was always going to end badly.

How Should Music Be Sampled?

There ought to be a relationship between the artiste and the culture from when the music is formed. Beyoncé, curating the Lion King album, had to feature African artistes to adequately represent Afrobeats. Had she featured none, there was sure to be backlash.
Also, music, however commercial it gets, remains art. And art is treated with utmost respect – you don't just go about searching for the hottest sound and making a similar song, then selling to your country. You visit. You learn. The sound becomes a part of your artistic journey. Kendrick Lamar, an American, has incorporated African musical elements (mostly from South Africa) in his music, but no one cries fowl. Why? He is a man whose search for peace in the Motherland is well documented. His visit to South Africa inspired his 2015 album To Pimp A Butterfly.
Diamond Platnumz clearly has these to learn. For long, music has traveled, and has been sampled. However, there is an ethic to it. Nigeria too, came for Tekno, one of its Afro Pop darlings, when he 'stole' a portion of lyrics from Danfo Drivers, a two-man group from Ajegunle which peaked in the mid 2000s.
Although S2Kizzy, in the interview with Wasafi Media hinted at a remix which features Naira Marley, that is at worst, a lie, and at best, damage control.