Rap music in Nigeria, to be commercially viable, has to feature local elements. Many Hip Hop artistes, with their rigid artistry, barely scratch at the top, where mainstream acts reside. Some have mastered the game, and have delivered local, and held down the rap aspect, too. Artistes like Nigga Raw and MI Abaga has shown that one needn't necessarily make sacrifices — often, the local can flow into the Hip Hop; one only needs the precision. 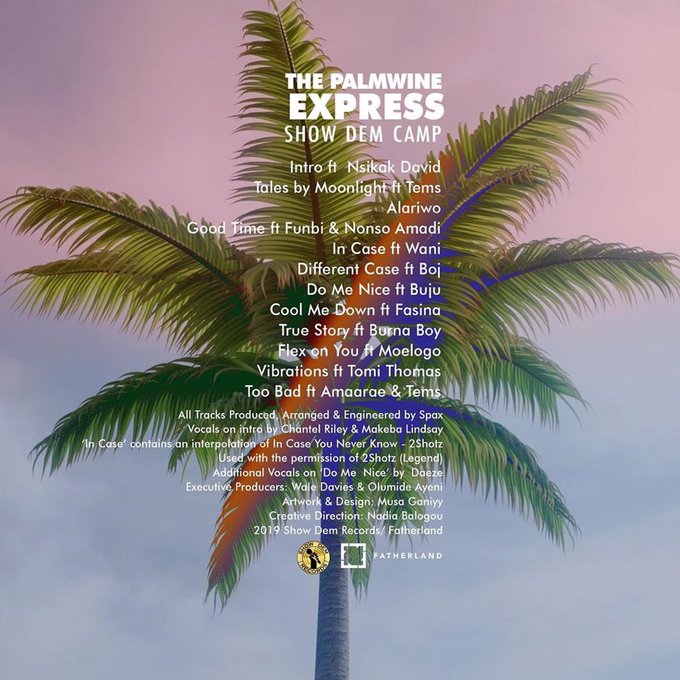 It is such calculated moves Show Dem Camp execute with their Palmwine series, creating an in-road for them to enjoy an admirable level of commercial success.

Flowing naturally into Show Dem Camp's musical brand which has, through the years, been something of a cross between Alté and Hip Hop, the Highlife Palmwine music offered was a graceful opportunity to be more versatile, and claim a spot in the competitive scene. Fans have gravitated towards the songs which pairs youthful hooks (from features) with wise old verses delivered by the ever-present duo. One could fashion this sense out of Palmwine Music's success: that its biggest fans were youths, purposeful in fun, and knowledgeable even when grooving.

That the setting of a palmwine joint evokes the spirit of communion (another prominent feature of the SDC brand) is more reason why it appealed to a wide section of listeners, many of which will make their way to the Muri Okunola park this December, ready to perform the songs with the artistes on stage; in homage to Detty December. But before then, before the rapping and the shouting and the drinking and the clinking of cups, fans have been served straight out the gourd, fresh palmwine.

A run of church-like keys opens the album, amidst a flurry of other activities. Cliché start, using a public announcement, but the "if you have some good herbs" exception to the No Smoking rule would really work for some folks I know. Its atmosphere runs into "Tales By Moonlight," a reflective number which is held by an impressive Tems performance. Her unique vocals are lifted by the investment in her lyrics. "Truth no get pikin, I need some honesty" she sings, mirroring Tec's verse which had the line "them no give us light, dem say make we shine".

The features continue in fine form. "Good Time" opens with Nonso Amadi vocals, over a rolling beat, warm and sure. Funbi delivers admirably too, as he and Nonso wrap the song wonderfully, protected by their golden vocals. Without the rap verses, I reckon the song will still be a good one.

Wani takes hook duties on "In Case," interpolating a 2shotz' classic. However committed his performance, the song doesn't very much excite. BOJ–assisted "Different Case" boasts perhaps Tec's finest verse on the tape, which features all his usual common man perspective, the storytelling boosted by his casual infusion of pop culture. On the other side of the BOJ hook, Ghost conjures lyrical miracles, his lines well garnished with his admirable knowledge about women and their bodies. BOJ asks: What is really wrong with me?

Buju, on "Do Me Nice," has no such questions. He seeks physical, intimacy with a woman. Tec's verse delivered somberly, features some nuggets ("We brought palm wine wey you shack first / Now they wonder which sound we gon tap next" ) and Ghost ("Gidi's rap monarch") is, as usual, brilliant. Somewhere along this point, with very few exciting moments to relish, the listener begins to grow more tired, and the express drive is just another day in a life full of so many promises, yet offering little.

One hopes that with the third project of the series, the question is asked with honesty: should Show Dem Camp toss away the gourd and say Party's over, guys? The sound has been well employed, a tactic which has ensured they partake in end-of-the-year spoils. It has been a blessing, this Palmwine music. Even with some show-stealing performances (Burna Boy on "True Story," and Tomi Thomas on "Vibrations") from the features, it is the rappers themselves who seem tired with the sound – their verses are largely uninspired, and the Knowledgeable Aristo aura they effortlessly capture on the previous tapes is only mild here.

The palm-wine, while not the freshest, is yet consumable, but at the risk of intoxication, let's call it a glory night with these three servings.