"Realms EP": Are We Expecting Too Much From Wande Coal? 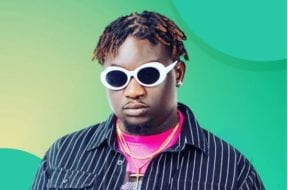 It bears testament to a musician's genius when he holds a country to his music as if a precious gift (it is). He gives it sparingly, deliberately, and some would say lazily. But irrespective: nobody be like Wande.

The iconic artist who began making waves a decade ago today shared a new project, the 7-track Realms EP. His only solo musical effort this year had been ‘Again,’ the syrupy love number produced from Melvitto's golden soundboard.

However, a persistent complaint follows the new project, even before we've listened: there are just three new songs: ‘Check,’ ‘Ever Blazin’ and ‘Vex,’ a bass-heavy collaboration with Sarz.

Nigerian-American rapper Wale delivers a guest verse on the remix of ‘Again.’ Dance ready bangers ‘Ode Lo Like’ and ‘Naughty Girl’ complete the tape. As expected, all seven songs are earworms, and will stay with the listener a long time so let's address the issue at hand.

Should we expect more from Wande Coal?

Wande Coal is widely considered a pioneer of the current Afro Pop sound. When he made bangers like “Bumper 2 Bumber” and “You Bad” in 2008, few would have expected the effervescent delivery and soulful vocals to inspire the music of artists twelve years later. From Wizkid to Oxlade to Teni, the vestiges of trademark Wande influence their styles. Speaking Apollo with Hypebeast, Fireboy DML spoke of ‘Spell,’ track two on the album and features WC. “Wande Coal is my idol. My debut project was never gonna have any features but I just had to get him on this one. He’s so special to me and we had a special moment creating “Spell.” I watched him do the things I’d been listening to my whole life and that moment was surreal”

Given the global appeal of Afrobeats, artists like Wizkid, Davido, Burna Boy and Tiwa Savage doing great internationally, they've been the persistent demand for Wande Coal to step into his obvious greatness. The man can make a banger from anything and they're sure to be plenty in his vault and, for the life of his loyalists (as we all are), it's hard to comprehend why he doesn't release music more often. Although the artist signed a distribution deal with EMPIRE in December, songs trickled rather than fed the thirst of his myriad fans. There's also the concern of his PR team not doing enough.

He is not underrated. The difference btw wande coal and the trio is hardwork and focus. They all have the same level of Grace. Na black diamond no wan shine himself https://t.co/tYTymX27Tb

But the Wande Coal phenomena forces us, at least I think so, to consider the humanity of musicians. We barely know the details of his reality and although I've heard stories around (ranging from the brutish tale of drug abuse to imminent poverty to his time as a top artist having ‘passed’), they're always speculation and pays little respect to one of our more iconic artists.

It is more than normal to be frustrated by an artist's work (especially when everything else is happening at a breakneck pace) but there's more to life than the one that's lived in the spot light. Although people seemed to consider that when we lost our dear Chadwick Boseman, it wasn't until hours later before celebrities again became public property, subject to unformed opinions and inconsiderate comments.

This is written in anticipation of the tweets that will suggest that Wande Coal has fallen off and that the new guard now led by Burna Boy has eclipsed him. That's wrong: we can accommodate all our stars and the realm of music is wide enough for every song and project. Especially if it's Wande's.