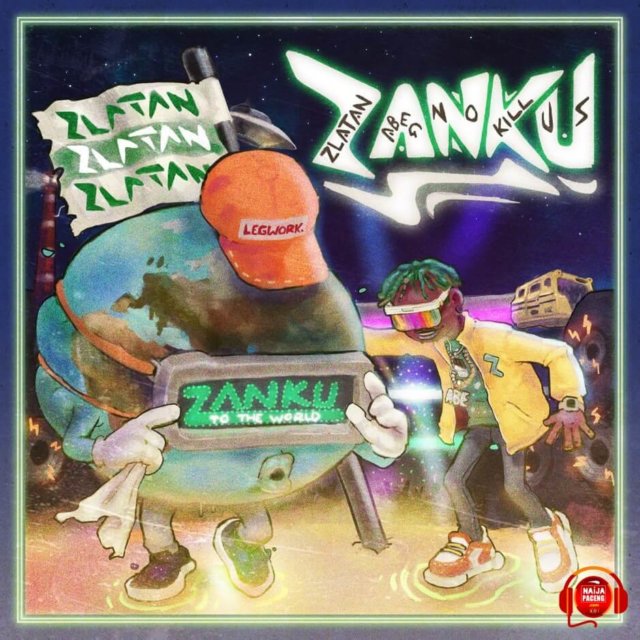 Zlatan Ibile's rise to the top of the musical food chain is, no doubt, linked to his Zanku exploits. The dance, a particularly exuberant one, features carefully placed jumps and leg placements. These are further pronounced by movements in the dancer's upper body. More than just the one to popularize the Zanku, the Ekiti-born rapper, (real name Omoniyi Temidayo Raphael) has – via his energetic rapping, spiced with his numerous adlibs and the now classic "kapaichumarimarichupaco" – been a fixture on Afrobeats charts.

Zlatan is something of a graceful story, a tinge of supernatural favor evident in his come up. Ask him, and he'll probably say the words: na God. However, to deny his strategic partnerships in the industry would be to flip over a most important page in his yet-to-be-written biography. In 2017, he featured Olamide in the song "My Body". A video of Davido dancing to it added to its popularity – a year later, he would feature Davido on "Osanle," another indication of his steady progress. Then came "Killin Dem," a collaboration with the Man of the Year Burna Boy. His stars, it seemed, were aligning. Naira Marley, who, in an interview announced he has a joint project with (scheduled for release in 2020), has also proven to be a reliable colleague, sparking up the flame that led to "Am I A Yahoo Boy," probably Zlatan's biggest feature yet.

With the world at his feet, Zlatan has released his debut album. Titled "ZANKU," it is no doubt a consolidating move, the words in their entirety meaning Zlatan Abeg No Kill Us. A nod to the pleasantness of his music, it is perhaps the most suitable and simplest album title the man could appropriate. Simply put, there was no way this could be titled something else.

There has, however, been concerns. A single, as most know, is a different thing, compared to a full length project, more so an album. Could Zlatan pull it off? The man, no fear whatsoever, took a swerve away from the less-scrutinized EP and delivered to us, his album: ZANKU, the dance which has become all at once, the stamp of his personality, a movement taken up by the streets, and now, he is taking it to the world. How carefully placed are – in the fashion of the actual dance – his leaps?

"Wake Up" is a fine opener, a mid-tempo song carried by Zlatan's God-inspired singing and introspective rapping. Delivered mostly in his native Yoruba, it settles comfortably on the sunny Spellz beat. On the next song, Zlatan goes all out: "Yeye Boyfriend," still hot in the streets, fill in. A rather wonderful choice for the second song which, in the cases of many Nigerian albums, is the real opener. It is a song which bangs – this, it ought to be remembered, is the Zlatan which we love. Comedy laced with dance, then the aggressively menacing rapping. Then the Rexxie production: a working formula. Many songs on ZANKU work up to this formula, and across its seventeen songs, they are separated by some tracks which are unique and, in a most refreshing way, out of sound. These, when observed, are songs that feature other artistes.

The Davido and Yonda featured "Super Power," is a fast paced banger, featuring risqué lyrics from the artistes. Davido: "I get power to do one hour... She come my palace she wan' sleep over." The vibe, which floats a whistle-like sound in the background, is a head bounce-inducing one. Patoranking makes a superb feature on "Distracted," a song which showcases his ability to vivify a song. Zlatan, for his part, tells a tale of Celebrity, singing to another person, a girl, in the chorus: "I'm getting distracted, baby." The Tiwa Savage-assisted "Shotan" is sugary Afro Pop cheese, with Tiwa well sinking her teeth into its entrails.

A particular standout happens to be "Life," a story-driven track which details his rise. Find me wielding a wicked I-knew-it! grin when he raps about wearing one shirt to school. Followed up by "Adura Agba" which reveals a prayerful scope, Zlatan's aim is revealed. ZANKU is a map which charts his path from the years of struggle to his current level of popularity. And, across its songs, the perks of celebrity are revealed. Although his range is rarely stretched, that reveals the second (and perhaps the most important) purpose of the album: to consolidate the aforementioned level of popularity. A working formula is rarely done away with.

Zlatan’s ZANKU is delivered on a flurry of drums, street-lingo, and aspirations. True to his humble and yet colorful beginnings, Zlatan has gone about his business in remarkable fashion. Where a song stutters, there is a make-up song one skip away. (Caveat: on your first listen, try not to expect much.) As he’s demonstrated in his storied career, Zlatan has delivered admirably, even with odds against him.