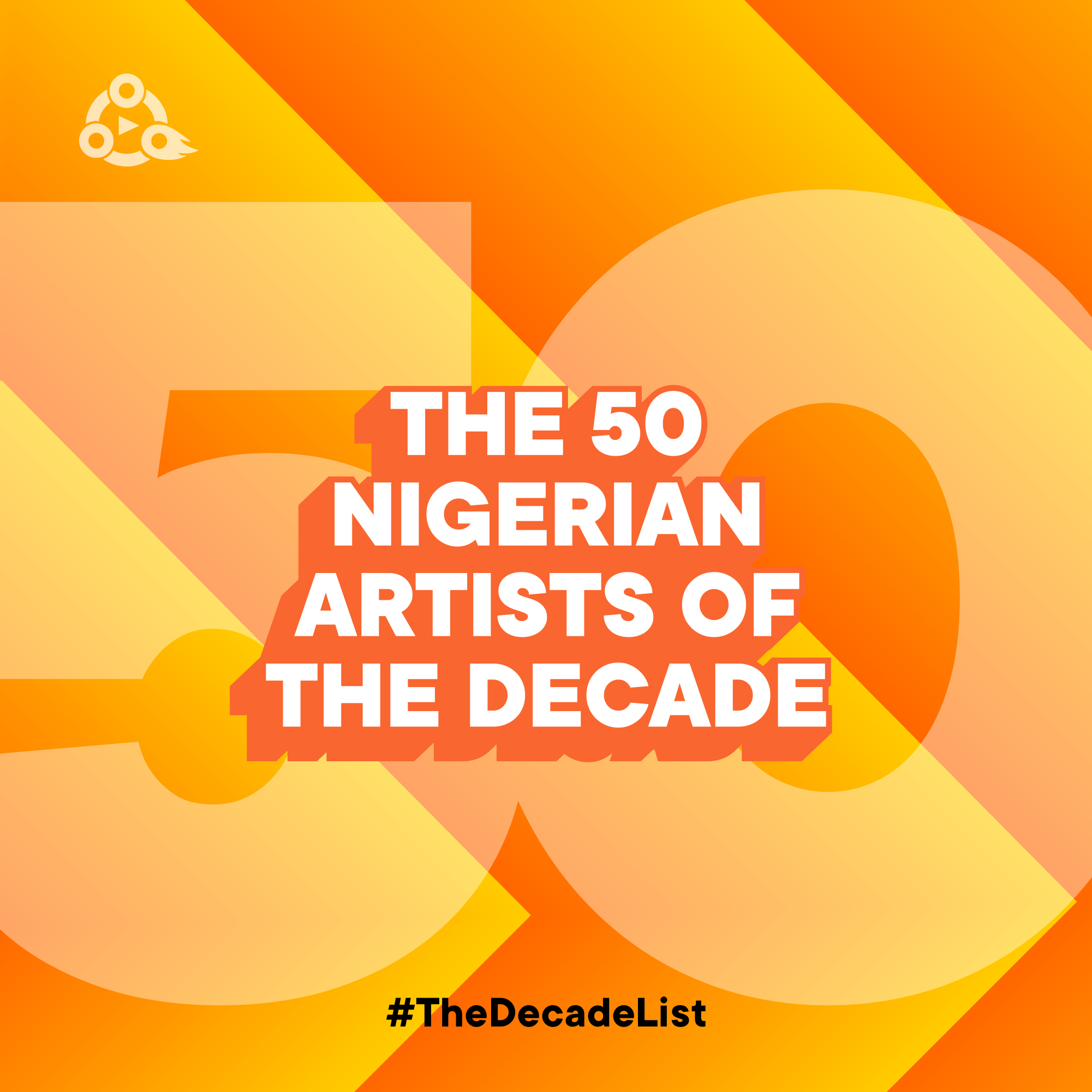 Music is constantly evolving, more so in Nigeria. To be a successful artiste is to place a firm finger on the workings of a particular industry.

At the start of the decade, artistes who popped were the usual suspects, the 2Babas and the D’banjs. However, there was suddenly an influx of new artistes on the scene. Since then, some have stayed, and many have left, now cast away to a purgatory of some sorts, neglected until they resurface on the scene.

This goes to show that in any music industry, competition is stiff, particularly Nigeria’s, the biggest in Africa, and one of the fastest growing in the world. There are too many artistes for one to be passive about the grind. To the ones who stayed, their spell of dominance is marked by their moves. These are The Greats, whose efforts have seen them define their time, especially this decade (2010 – the present). Which artistes – in their chase for success and its in-betweens – have defined these years?

With these in mind, we put forward #TheDecadeList, curated by our team of music experts here at NotJustOk.com, to lend our voice, to recognize these Nigerian music Greats over the past decade. 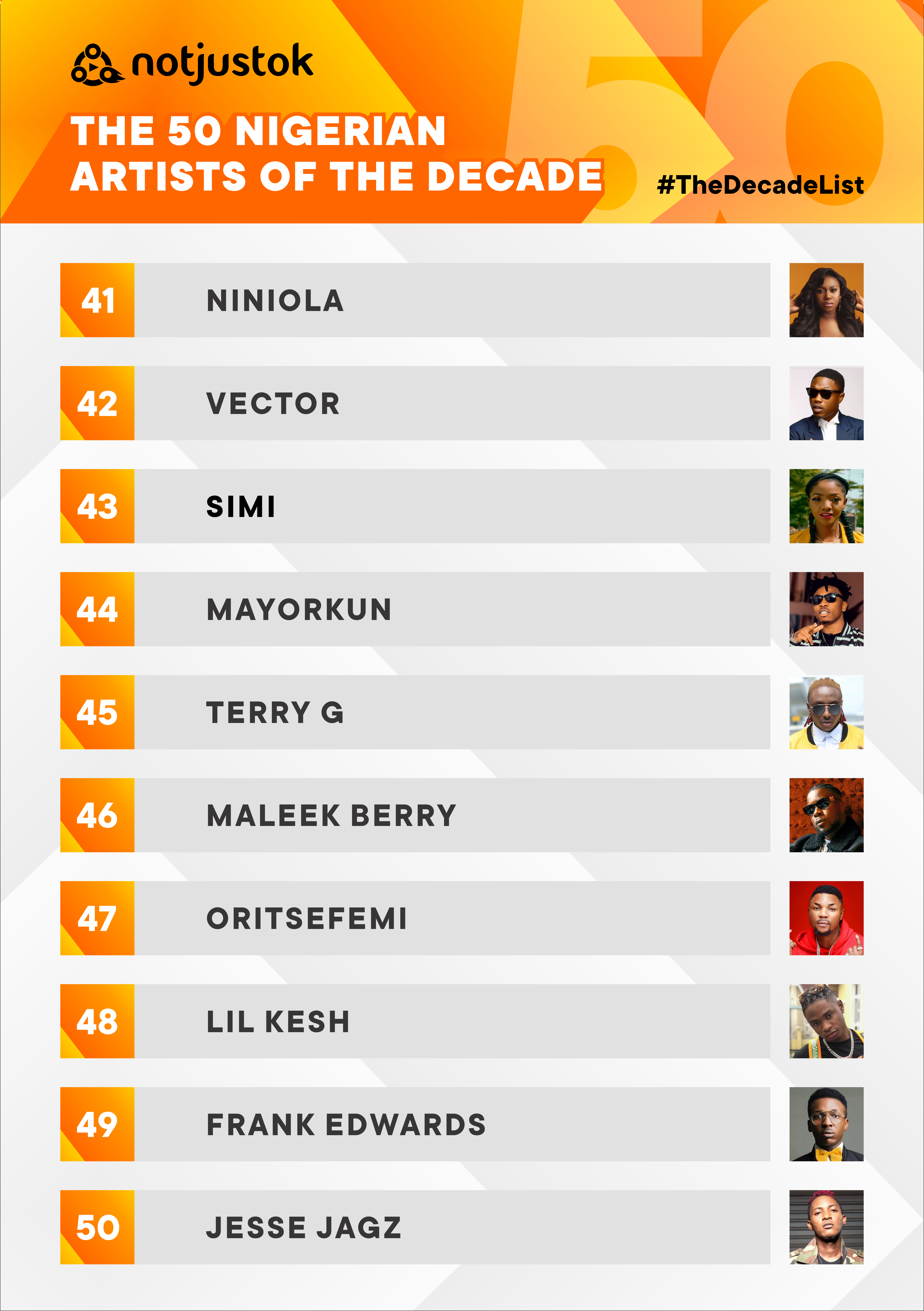 An extraordinary producer and rapper, Jesse Jagz has been a standard for music in the country. His songs feature lyrics of intense introspection, usually inspired by his beloved plant, Marijuana. His production is largely experimental, and this extends to his own music, most of which is self-produced. Jesse Jagz has released four albums, the first of them (“Jag of All Tradez”) released in 2010. His latest was Odysseus, released in 2017. It is however, on 2014’s Royal Niger Company where Jesse snapped the hardest. The album, hailed as his magnum opus (yet), is one replete with moments of pure excellence. On songs like “Louis,” “Sunshine,” and “How We Do,” Jesse pays homage to his musical heroes, many of which he actively channels in his music. With a project speculated for release in 2020, the younger Abaga son might just reinforce his often stated position as “The Greatest”.

The Enugu-born gospel artiste is a music machine, his consistency placing him highly among his contemporaries. One of his major achievements lies in him starting up Rocktown Records which since become home to artistes like Gil, Divine, King BAS, Nkay, David, Dudu, and Micah Heavens. While songs of Frank Edwards haven’t had the crossover appeal of Sinach, he’s powerfully placed in the continent, constantly performing in shows and selling out venues of his own.

The teeny voiced rapper has, for spells, dominated the streets. His music is lively and draws inspiration from traditionalist Yoruba music. His 2016 album, Young And Getting It (YAGI) is one of the more pleasurable albums of the times it came out in; and further points, when his select genre is considered – no doubt his talent was the key motivator in that epic Olamide Headies rant.

The artiste, known for his spellbinding voice, had a resurgence in his career with “Double Wahala” which got a D’banj remix. His career is marked by inconsistency, but even in its shortcomings, Oritse Femi’s position as an elder in the game is unquestionable.

Once known as a producer, Maleek Berry has spent the better part of the last three years correcting that oversight, with solid singles and EPs. A most versatile artiste, the “Kontrol” singer managed to encompass all his creative skills, and apply them to music, whether his or produced. It is this quality that has led the UK-based talent to be highly sought after –he’s famously worked extensively with Wizkid and American artiste Goldlink.

Once the infamous, the latter years of the decade which pronounce his terrible absence has led him to be considered with understanding. His music, loud and brash, thrived on improvisation, a core element of survival. Terry G produced some timeless classics (and record some too) and his legacy should be respected, even though his peak years wasn’t stretched as fans would’ve liked.

The DMW star has built a solid image based on flashiness and sassiness. His dreadlocks attract, but more so his music, colored in poppy vocals and cheesy songwriting. His 2018-released album, The Mayor of Lagos, was a treatise on this tested style, one that has led him to become a pop darling of the country and dare I say, the world.

Her sophomore album, Simisola, released by X3M Music, is no doubt a classic. The project, which featured timeless records like “Remind Me,” “Aimasiko” and “Original Baby”, showcased her witty sense of humor and a sharp pen. Since then, she’s become one of the frontier acts in the industry. This year, she released Omo Charlie Champagne. Dedicated to her late father, Simi once again, albeit less poignantly, captures magic on the album powered by singles like “Ayo” and “Lovin”.

Vector has, at a point in his career, been an A-Lister; a rapper with the traction of a Pop star. His myth is somewhat powered by his lyricism, which blends more traditional forms of rapping with local lingo. As a result, Vector is much loved. Critics, however, are much harder to seduce. They question if Vector has any worthy work, since State of Surprise (released in 2010) was mid, and it is his best, kinda. Vector seemed to have responded with his latest LP, Vibes Before Teslim, a ten-track affair that builds on the momentum of his victory in the beef against M.I Abaga.

The Apata daughter once dabbled in Soul music. In fact, she has a song with Folk artiste Johnny Drille, titled “Start All Over”. However, since then, things have changed. Niniola now fronts her music as a child of the Afro House genre, a beats-heavy sound dominated by risque lyrics. She’s succeeded in making a way for herself in the industry; Niniola’s “Maradona,” is also famous for having credits on a Beyoncé song.