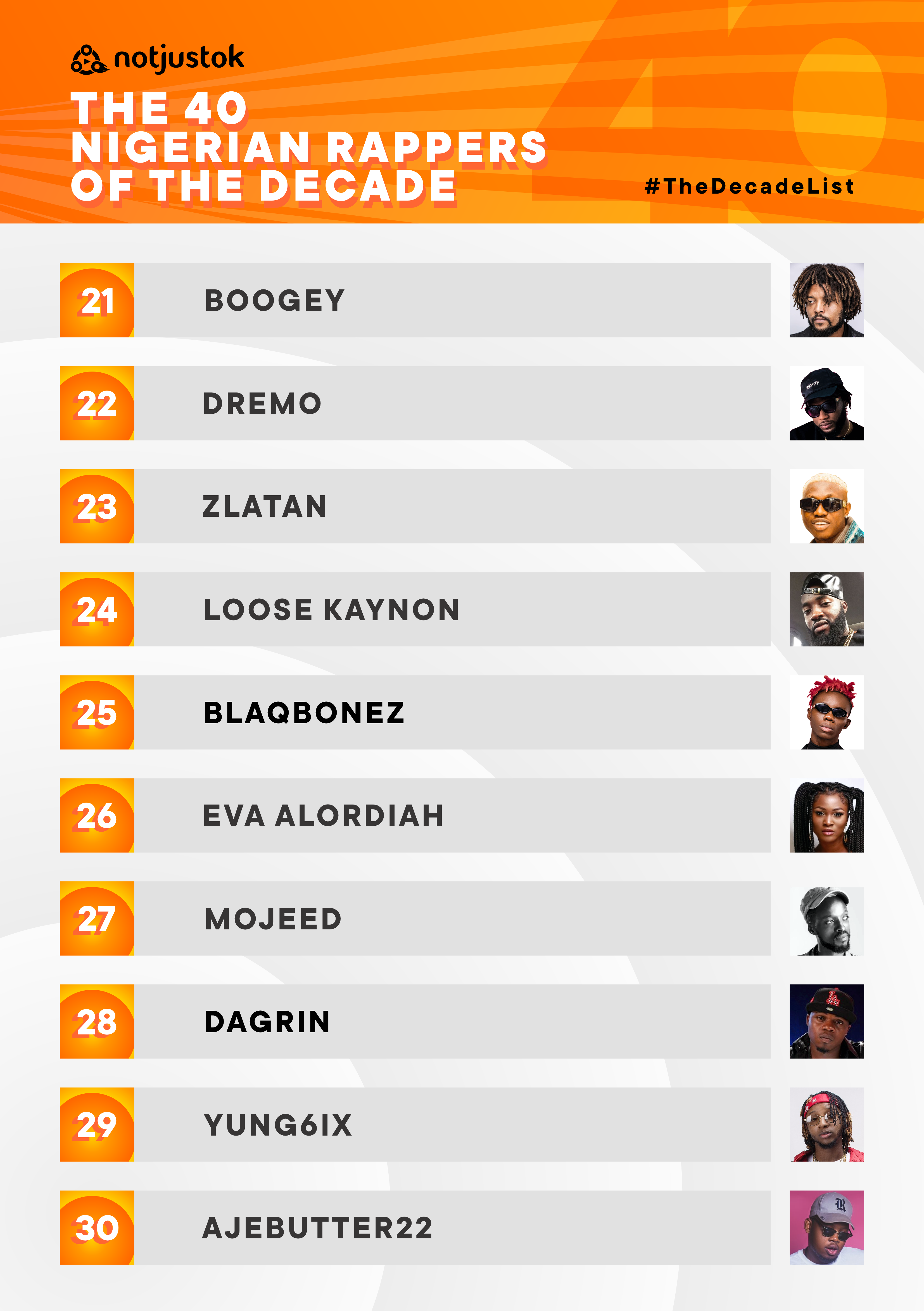 He had the cult classic "Senrere" but it was the release of "Omo Pastor" in 2012 that saw Ajebutter shoot to continental fame, particularly within Nigeria, where the populace loved the humorous tales he told in his songs.

Fast forward, Ajebutter 22 has two albums, and just last year (alongside BOJ and Falz) he released the second EP in the Make E No Cause Fight.

The rapper who fancies himself the "King of the South" has blown hot and cold throughout the decade, but he still manages to remain a bit relevant.

His "Export" verse on M.I's Illegal Music 2 put him onto to a bigger number of Hip Hop heads but it was "Follow Me," the Wizkid-assisted track that gained him mainstream followership. Since then, his music has aimed to please both sections of fans –his debut album 6ix o' clock was a singing and rapping affair which featured some of the hottest names in the continent like M.I, Phyno, and South African rapper Da L.E.S, among others.

Olaitan was gone too early, but his legacy remains. The Ogun State–born rapper who poignantly channeled 2pac with his street tales was one of the progenitors of indigenous rap in Nigeria.

Although his album, CEO, an undisputed classic, dropped in 2009, his death some months later ensured that it was massively played in 2010 and beyond, as many of his songs became cultural touchstones of his unwavering spirit as poured into his raps.

The rapper released one of the most acclaimed rap albums of the decade in 2014's Westernized West African. That tape which featured timeless songs like "Murtala Mohammed" and "Nigerian Time" showcases the rapper's tunnel vision, his sharp and uncompromising lyricism which is found all over the songs and projects in his discography.

Nowadays, Eva might not be big on the music but once upon a time, she was untouchable. Her songs flitted between genres, but even when she's on a Dancehall vibe, her sleek lyricism which is carried by her syrupy delivery never wavers.

Since her breakthrough into the Nigerian music industry, Eva has garnered several awards including one Nigeria Entertainment Award from 4 nominations, one Eloy Award, and one YEM award from two nominations. Her debut EP, titled The GIGO EP, was released for free digital download on 20 November 2011.

The rapper may fancy himself the Best Rapper In Africa, and while that is a tall claim, he reaches the height, both literally and figuratively. The rapper has been a dedicated emcee, right from his days as a battle rapper on online platform Nairaland.

Before his breakthrough debut Bad Boy Blaq, he had released a lot of mixtapes and EPs, most of which were highly rated in the underground scene. His debut album, as opined by industry folks, "changed the game," with its melodic spices which found a huge fan base in young people.

The bossy-voiced rapper is a Jay Electronica. His early reputation rested on the mystery of his person, his unavailability, even when he had all the tools to push through as a top rapper. Fans clung on to him, their loyalty spiked by his standout verse on "Lost," a song off MI's feature-heavy Illegal Music 2.

Nowadays, Loose Kaynon is not so obscure. He's released a solo album (The Gemini Project) and in 2018, alongside A-Q, released the Headies-nominated Crown. It was an album which more than marking their new creative relationship, signaled the formation of 100 Crowns, a record label he co-owns with A-Q.

As the convener of the super successful "Wax Lyrical," Loose Kaynon's contribution to Hip Hop in Nigeria also lands him here; he also supports A-Q in organizing The Coronation event which is held annually.

This placement was hotly debated among our writers when curating this list. Although a newbie, most of our writers reasoned that his indigenous Hip Hop (with the adlibs and all) is special, and by his affiliation to Zanku, Zlatan's impact is heavy, and even stretches past Hip Hop. When one does away with the elite preference for lyrical rap, Zlatan's come-up is a big lesson for Hip Hop, how it perhaps, needs a bit more than the bars and all.

He marked his successful season with the release of the Zanku album and some months afterwards, named his record label after the dance which shook the world.

When Desiigner's "Panda" was the hottest song on the planet, Dremo followed a multitude of Nigerian rappers who released covers. It was his cover however, that raged the most. Over the thumping beat, he rapped aggressively, chanting Afrobeat legend Fela's name on the chorus.

He was signed to Davido's DMW, and in 2018, released the critically acclaimed Codename Vol. 1 EP which showcased his penchant for humorous punchlines, relatable bars, and yes, his singing ability. Amidst a number of Pop stars he calls labelmates, Dremo holds his own when he's not dropping bars; this, no doubt, accounts for his popularity which transcends that of the typical rapper.

To those who listen to his music, Boogey is the undiluted truth. His raps are usually intricately structured, with Boogey having an A mark in nearly all the criterias that makes a great rapper. His debut project, Artificial Intelligence, still remains a cult classic. With Boogey gaining underground buzz at the time, his skill landed him on songs alongside Mode 9 and MI, unarguably two of the greatest Nigerian rappers of all time.

Boogey has eight projects (all released in the decade) and most of them are critically acclaimed. Bar for bar, Boogey is rated as one of the best ever.