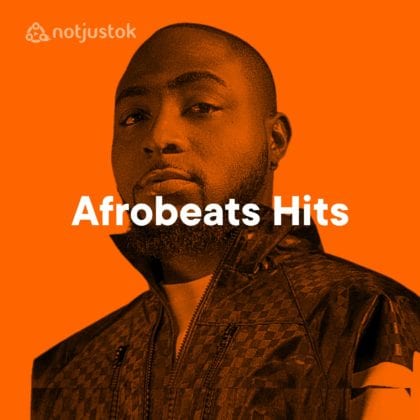 Davido on the cover of Afrobeats Hits playlist on Spotify

One of the most beneficial moments of art is when music tells a nuanced and personal tale, and embedded in great music. Ms. Olong, who featured on 3rty's Blue Crystal tape, is one such musician. "Outta Town" moves languidly so you hear each line which drips with poetry and simple wisdom. "Outta town/ Oh you must be dangerous in it," she sings, detailing her curiosity with the song's character.

Anyone who knows Nigerian music can't understate Wande Coal's influence on the styles of today's top acts. Himself still much a top artist, he shared the long awaited Realms EP. "Check" is a favorite, a serene vibe laid on warm production and driven, no doubt, by Wande's vocal and lyrical presence.

From her collab EP with former label mate YCEE (Late Night Vibrations), Bella announced herself as one to watch for. She's since put out tapes and singles independently, delivering music to an engaging base sold on her charm and witty songwriting. "Gbolahan" furthers these ideals, the artist revealing a sardonic tone in bad bi*ch fashion.

For as long as we can remember Olamide has bended the streets to his sound, foreshadowing some of the brightest moments in Nigerian Pop since he made his bow more than a decade ago. His EMPIRE deal binds him to a 2020 album and in anticipation of a busy last quarter, he's shared "Eru," an hypnotic banger which spells for an enjoyable time out.

Peruzzi might be earlier, but Ogranya is definitely onto something atop the "Lagbaja" train. A vocalist per excellence, the artist's ice cool delivery finds the perfect vehicle in his choice of words, free flowing and emotive. The song moves like part of a bedroom/sex playlist but it's actually a heartbroken rendition of one man's loss measured against the entire world. Interpolating the titular legend's no-do-gra-gra on the outro turns to be genius too. Really love this record.

Since he made the Lagos to London album, Mr. Eazi has been very intentional with his international collaborations, bringing his unique mix of Nigerian and Ghanaian sonic influence to foreign sounds. "Oh Ma Gawd" is the Caribbean-influenced bop with Major Lazer, and features American superstar Nicki Minaj and K4mo. Upon release, it went number one on US iTunes.

Afro House queen Niniola combines with a duo of producers for the body jerking "Sibe," a record which puts her powerful vocals to entrancing effect.

Off his 6-track EP STRAFF FROM NIGERIA, the artist presents "NECESSARY," the project opener and an aspirational tune in sing-rap delivery and draws from the mid tempo production, a mix of lo-fi pop and afro pop. Do well to check out the entire tape.

With two excellent mix tapes to his name, Jinmi Abduls is worth every acclaim. The artist is set to release an EP (perhaps) this year and he calls on Oxlade and Joeboy for "Jowo," an exciting collaboration which espouses the intricacies of a love affair.

One of the stalwarts of the Bando Boyz Movement, Eniola Havoc leads by example, pushing songs and projects which sell his youth and charismatic appeal. His latest effort is a Drill record which features Picazo Rhap and is packed with energetic and skillfully laced bars. Watch out for Havoc, folks.

Afro pop icon Davido went offline but his personality and fans' expectations for new music kept his name abuzz, and with the release of his new record, he got back into the conversations fully. Suggested to be a diss track to a popular contemporary, the record has all the potential to dominate the rest of 2020. Plus, there's that looming possibility of A Better Time album. We literally couldn't have asked for a better time.