Why Did Dele Momodu Leave During Davido's Performance? 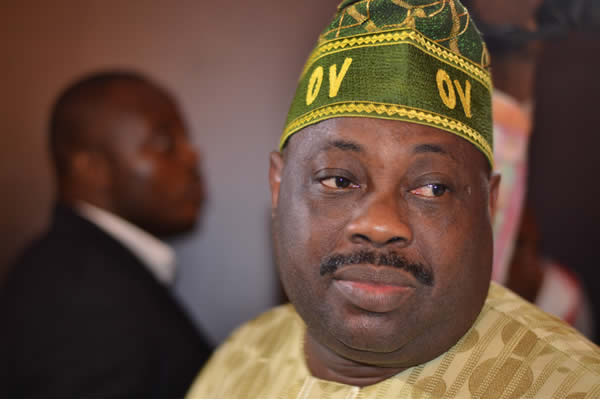 By now it seems that everyone has seen the footage of Mr. Dele Momodu exiting the venue at the conclusion of Davido's performance of "Bahd, Baddo, Baddest." Was it mere coincidence that Mr. Momodu left at that precise moment? Perhaps he had to leave to attend another engagement or maybe he needed to use the restroom. Possible; Yes. Likely; No. The general consensus is that Mr. Momodu left the event because he anticipated Davido's lyric, “Mr Dele na my boy, Dele na my boy.” Someone from the outside looking in may interpret the line as a compliment and not see the issue. However, those familiar with African culture and knowledgeable of the dynamics between Mr. Dele Momodu and Davido understand the problem at hand.

Davido has an infant daughter, Imade, with Sophia Momodu, the niece of Mr. Dele Momodu. Shortly after Imade's birth, she experienced serious complications in her lungs. Davido attributed these ailments to the alleged chronic marijuana smoking and poor parenting of Sophia. Davido then took his daughter to Dubai for medical treatment. In a series of since-deleted Instagram posts, Davido elaborated on the topic. An excerpt from the posts reads, "At the point of dying in November 2015, Imade had been rushed to the medical facility in Dubai, where she received helpful and adequate treatment and was duly returned to Nigeria, without any side excursions."

Mr. Momodu shares his perspective on the instance as well; "That's baby Imade with her aunt Ashley Adeleke who took her to Dubai a few months ago against her mother’s consent. The world has been told that the baby was sick that she needed urgent medical attention in Dubai. Imade’s mother was deprived of attending personally to her own baby." 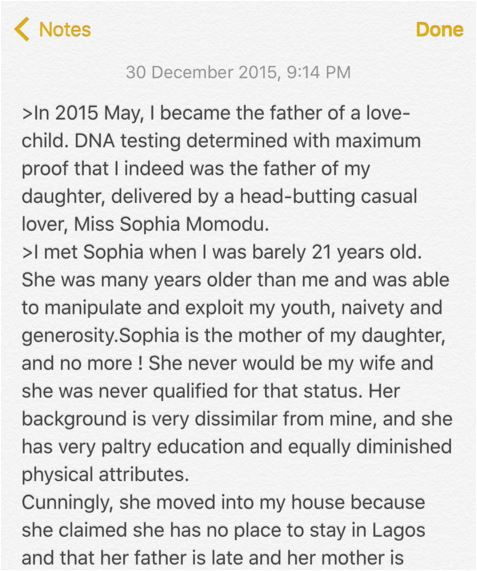 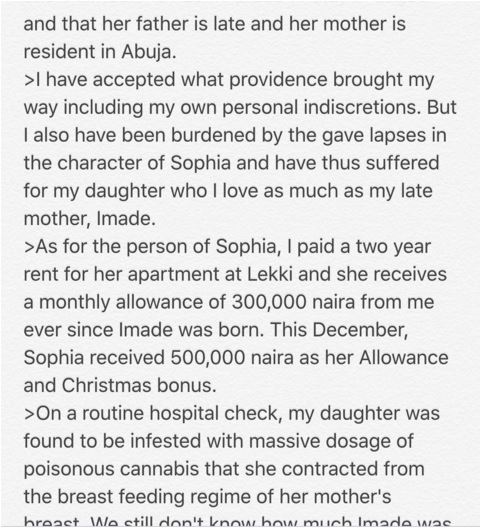 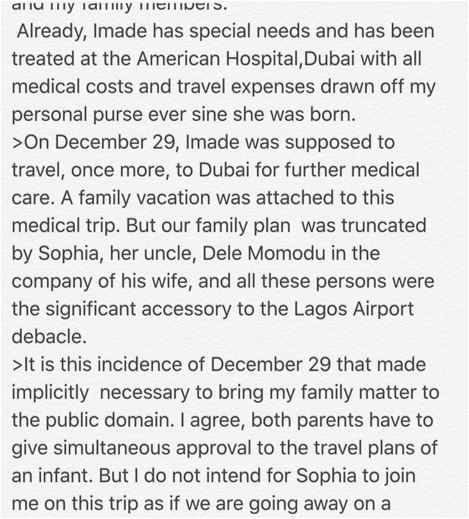 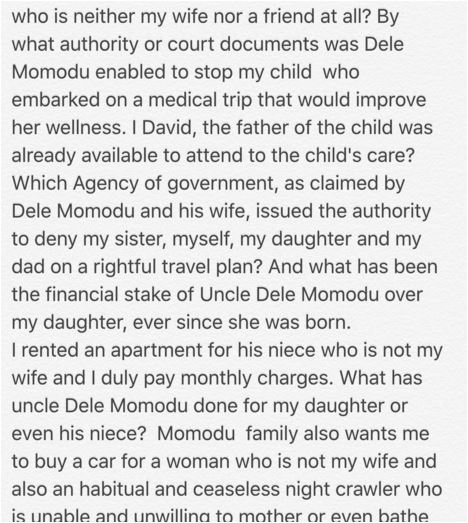 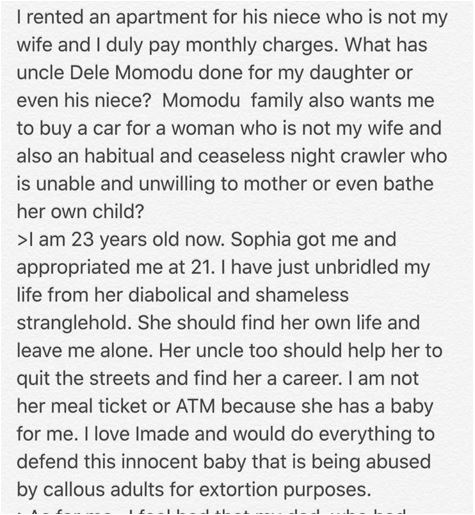 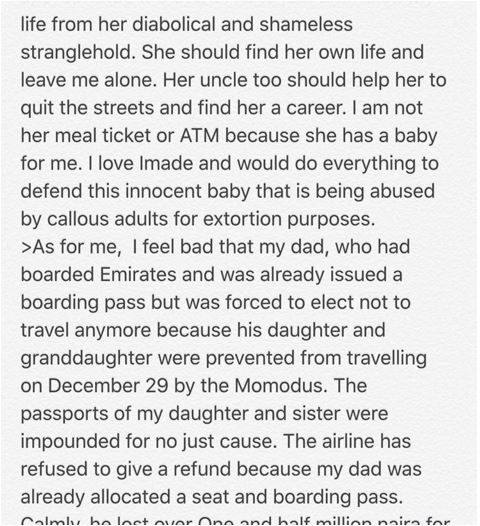 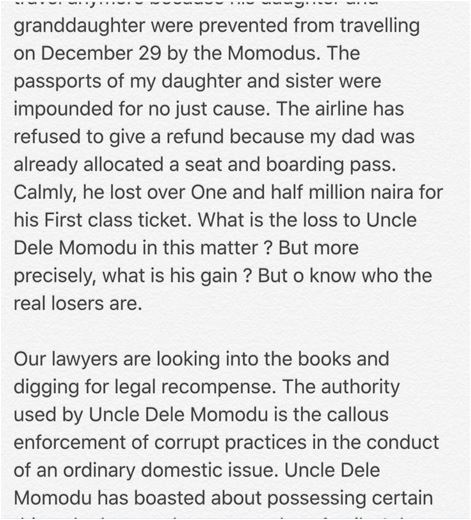 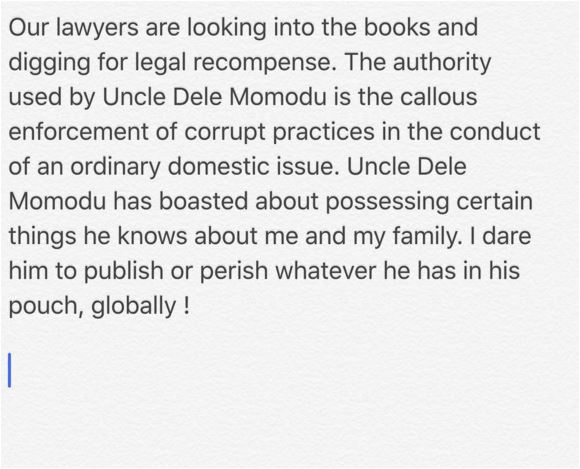 Davido then took the situation to new heights when he addressed it on his verse of Humblesmith's "Osinachi." The lyrics read, "My humble father, Osinachi, my lovely daughter, Osinachi, my baby mama Osinachi, Dele Momudu Osinachi, no be by force to go Dubai, abi na wetin cause the fight, and I just dey my own dey laugh, cause God dey my side." Davido also made claims that, "They want to take away my favour, they want to spoil my career, dem no know say I get flavour…." Mr. Momodu reacted rather calmly to the song, thus acknowledging Davido as his son and mentioning the high regard he holds for Adedeji Adeleke, Davido's father. The situation seemingly calmed itself and tensions ceased between Davido and the Momodus. However, the calm did not last very long.

Davido appeared on Falz The Bahd Guy's "Bad, Baddo, Baddest" to address his relationship standing with Mr. Momodu. Davido refers to him as my boy. Although some may see this as a compliment or gesture of kinship, others may construe it as disrespect. Mr. Dele Momodu is far older than Davido, so it is culturally unacceptable to call an elder my boy. The dilemma lies in Davido showing camaraderie to Mr. Momodu using a term of endearment, yet simultaneously disrespecting him. Mr. Momodu obviously recognized the lyric as a backhanded compliment, hence him exiting during Davido's performance. Either of the two has yet to release an official statement regarding the incident.

With 2017 being just mere days away, will the two carry on the animosity and bad blood into the new year or find a way to reconcile? It is safe to say only time will tell.