Yemi Alade’s ‘Empress’ Is a Feast of Sounds, Cop an Invite Here

Already referred to as Mama Africa, heavy is Yemi Alade’s head as she wears an almost 10-year long position as Queen of the African airwaves.  ‘Empress’ is Yemi Alade’s fifth studio album and with its creation, she was tasked with the responsibility of not only creating music for Nigerians, but other African countries that have embraced her and her sound. 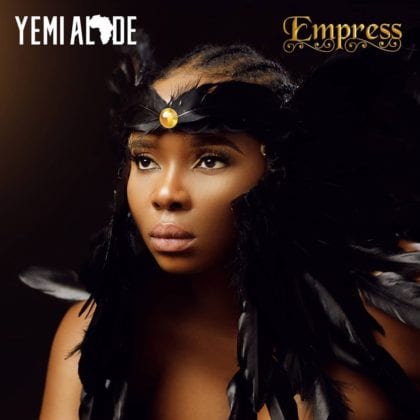 It is also her second royally themed album,  the first being her ‘King of Queens’ debut. This signifies her continuous growth and supremacy, eight years down the line.

In light of the evolution that has now become a constant where music from Africa is concerned, Yemi Alade was faced with another challenge which is ensuring that her album’s vibe kept with the time while retaining the Yemi Alade flavor fans all over had come to love.

So with ‘Empress’, Alade embarked on a mission to create a cohesive blend of sonic influences from different corners of Africa. It is commonly said that music is a universal language and essentially only requires to pass across a feeling to be understood, so Yemi Alade capitalized on this to create an album with a sonic profile that above all brings the listener to his or her feet.

Interestingly, she did not recruit a lot of artistes to help her out on her mission, and ‘Empress’ tracklist comes with slim pickings where featured artistes are concerned. French singers Vegedream and Dadju,  Patoranking and Rudeboy, the Mzansi Youth Choir, and Grammy award-winning British singer Estelle was the only artistes that made her deck of collaborations.

To balance this out, Yemi Alade ensured that the situation differed where featured sounds were concerned as ‘Empress’ is a cornucopia of South African house music, EDM, Igbo highlife, dancehall and coupe de cale, afropop and RnB.

The journey to the feast begins from the very first song, ‘True Love.’ This was the first single off her album and makes for a good celebration call with captivating South-African influences and drums. Here the sound is proportionate to the theme as Yemi Alade sings about love and overwhelming joy and the South-African vibe is further sealed with her adlibs and background cries.

‘Yoyoyo’ which comes next is a sweet highlife affair that sees Yemi Alade playing the role of a societal commentator who criticises promiscuity and unaccountability and in so doing, compliments the folkloric feel of the song.

Then enters French singer, Vegedream who partners with Yemi Alade in a lover’s duet on ‘Lose my Mind’ before dropping several lines in French to re-establish Yemi Alade’s Mama Africa status. ‘Lose My Mind’ is the starting point on features that showcases her versatility and skills at selecting and working with artistes that reflect her multicultural music. From ‘Temptation’ with Patoranking, to ‘Deceive’ with Rudeboy, ‘Rain’ with the Mzansi Youth Choir, and finally ‘Weeknd’ with Estelle, Yemi Alade’s influence is as glaring in their output as Estelle singing a few lines in Yoruba.

‘Empress’ is a 15-track answer to any doubters wondering why Yemi Alade is referred to as ‘Mama Africa.’ Its diverse yet cohesive nature serves as an aural depiction of the cultural richness of Africa with something to suit everyone’s palates. If you’re an EDM lover, ‘Dancina’ is there for you, for a blissful mix of afrobeats and RnB, you can fall into the waiting arms of Yemi Alade and Estelle on ‘Weekend’. For a cleansing and inspirational song, there’s Rain with the Mzansi Youth Choir. And on ‘Double Double,’ Yemi Alade closes the feast with a heavenly promise of double blessings.

With Empress, Yemi Alade sends an invite to party with her, this is the sign you need to accept the invitation.