PayBac Iboro's CULT! Speaks To The Power In A Way Only A Classic Can 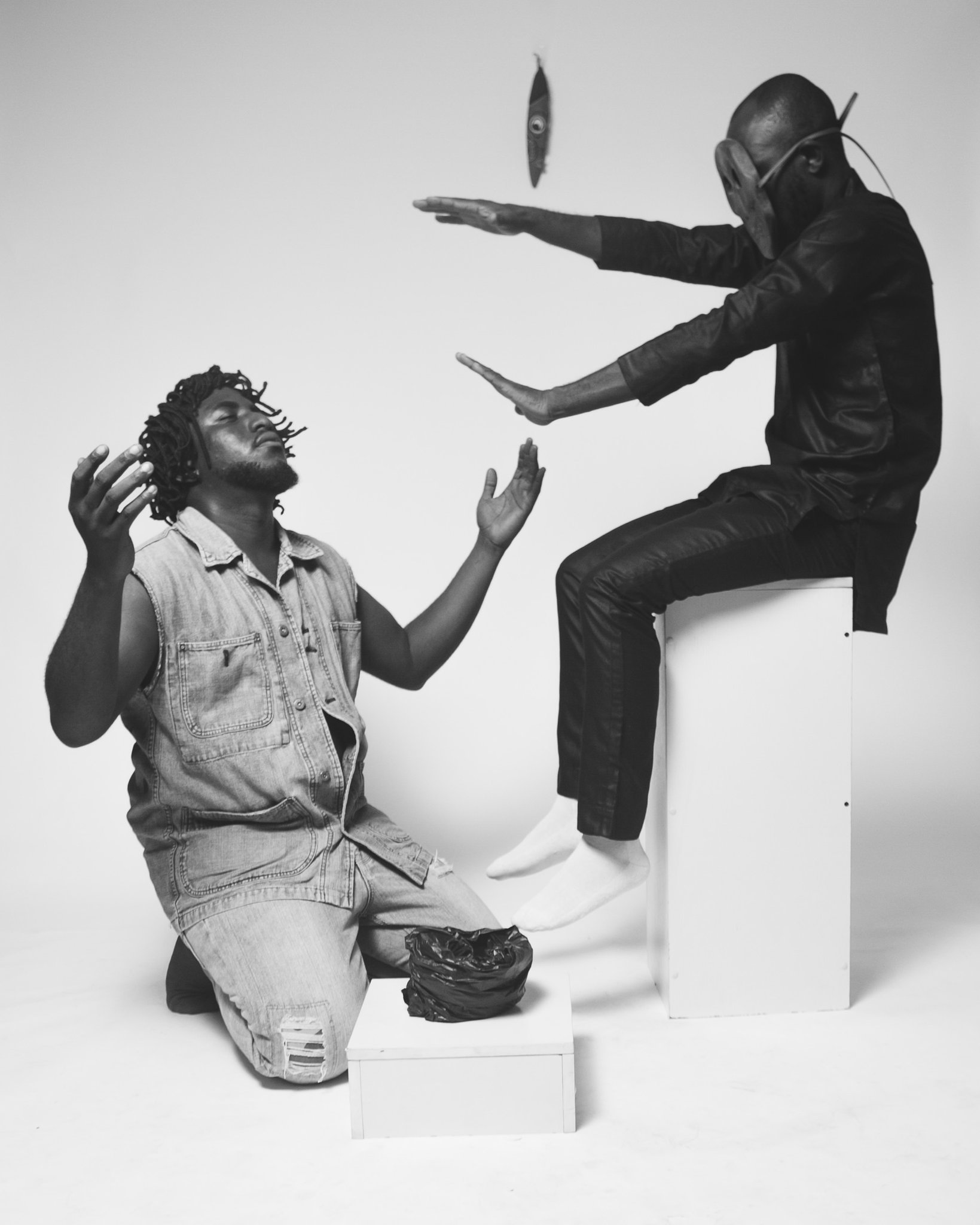 Paybac Iboro's CULT!, his sophomore album, is an interconnected narrative of his personal life, the Nigerian state, African traditionalism, and collective-fueled revolution, all in one fine splash of eccentric vintage African music influenced production.

PayBac Iboro's CULT! Speaks To The Power In A Way Only A Classic Can

"Aguiyi Ironsi," CULT!'s opener, shows PayBac's hand. With heavy allusions to the history and popular culture, the rapper, a most deliberate artiste, employs a variety of skills to represent the pulses of a creative like him.

PayBac Iboro has always been intent on making music which is an open window to his heart. Raps which, rather than engage in fictional eccentricities, stays true to his life as a person. For listeners of his early mixtapes, the humanity behind each record was immediately obvious. PayBac wasn't a smooth artiste, he was human: he coughed on tracks, rapped with a lisp, and had his voice crack like an old song; as an independent artiste with limited funding, his music has retained a DIY quality to it, which adds up to its homemade quality. Listeners could hear themselves in his words, and in a generation that has stretched the limits of stan culture, PayBac's music, while a dairy of his own experiences, bleeds into the life of many, as they form a small cult of stans behind him, loyal to the music but more importantly, loyal to its creator.

In 2018, The Biggest Tree, PayBac's debut album, was released. A collection of emotion-heavy songs, it was structured as a writer would a novel, in and out of personal events, national issues, girl problems – everything worked to present a character in tune with his realities and sensibilities, a particular victory for mental health because of its under-representation in Nigerian music and in general, the Nigerian state.

In the year of The Biggest Tree, PayBac, alongside CHx (who he's worked with on cult classic 2015's The Other Side of the Radio) delivered Autopilot, with PayBac's eccentricity was paired with sunny production from Charlie X (CHx).  He sounded happy on the airy Trap-Esque beats, and that seemed to be working its way to CULT!, a project he first announced after the release of "Boy Band," a bouncy number which sampled "Acid Rock" by '70's Afro-Rock band The Funkees. With the song having been described as a cross between "playful self-assuredness and whimsical rebellion," the rapper would extend that energy into a full-length project, especially after "ACTIV8," on which PayBac rapped about "balling like Samuel Okwaraji till [he] pass away" was well-received, stoking hype for CULT! which by the looks, was gearing up to be an experimental project.

If there was an artiste who could take on an audacious idea like CULT!, it would be PayBac; his music, as previously mentioned, has always tapped into childhood experiences as a resource to paint universal truths. This duality of function makes a return on CULT!, the rapper's sophomore album, a confident bridge between the personal and the communal. 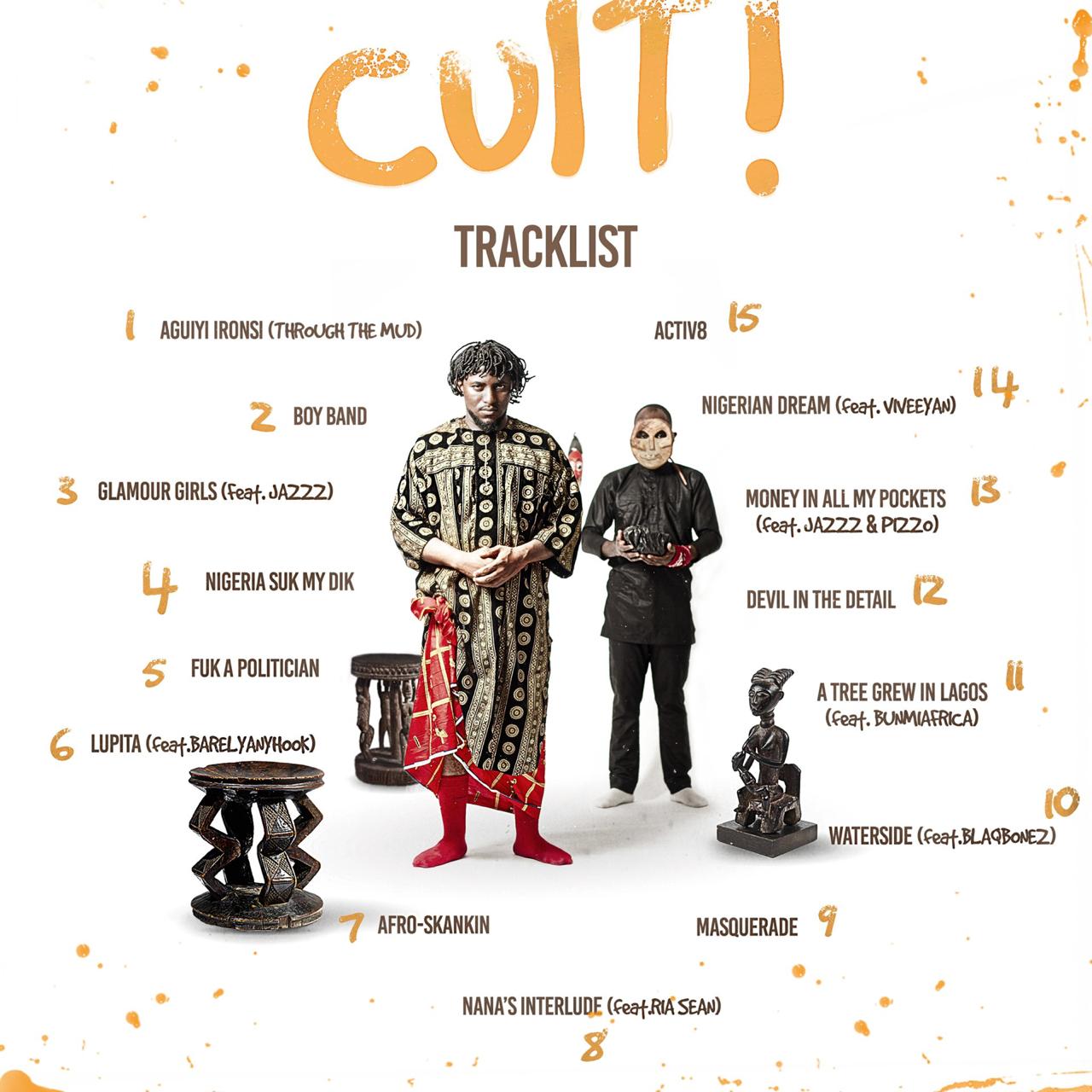 CULT! derives its influences from a vast experience – from Kendrick Lamar to contemporary Nigerian history. "Aguiyi Ironsi" begins with a Fela Kuti anecdote about suffering in the Nigerian context and on its first lines, references the brutal killing of Aguiyi Ironsi, a former Nigerian head of state, and pairs it with the artiste's own travails of persecution. With a fiery approach to delivery (very reminiscent of Lamar's opener to the Untitled tape), PayBac runs through a with a lot of self-conscious and nationalistic lines, bringing the thought full circle when he raps of leading a revolution and bringing the war to a kingdom that "can't move when the leaders are backward." A bar away, he pledges "allegiance to the flags but never to none of these actors." With the religious allusion ("spent days raging in a shrine"), PayBac is, in ways more than one, like Kendrick Lamar, who often turns to the spiritual for strength while embarking on a political quest; albeit traditionally, as CULT! remains Afrocentric in scope.

Elsewhere, these African influences are collected. "Abysmally frustrating and unbelievably exciting," Professor Chinua Achebe's words in describing the Nigerian experience, encapsulates what the artist seeks to capture in his music. "Boy Band," a collective-inspired song, in less happy moments, becomes a protest song against governmental agencies (like SARS and the Police) who, in the past years, have earned a repute for being joy killers and hunters of young people. "Nigeria Suk My Dik" and "Fuk A Politician" are songs which continue in the style, speaking to the less than satisfactory Nigerian state, PayBac's frustrations however sung gleefully, a nod to the school of thought – Fela Kuti as a prominent member – that sociopolitical concerns needn't eclipse the enjoyability of a piece of music. The latter, with bouncy Trap drums that would've found a place in Autopilot, makes for a short video on, say, TikTok, with raised middle fingers to the many Nigerian politicians who inspires an awry report like this. At the end of the record, an agitated voice at a protest screams "Enough of this madness... You can't silence us!" And you feel the pain; better, you're moved to do something, to not be silenced.

In Nigeria especially, youths are presumed to play an important part in forming the national set-up and consciousness. PayBac, born in 1991, has seen four-year terms linked inexplicably by governmental ineptitude in all levels ("no legislation, consummation please") from how they fucked our fathers' generation with neo-colonialist concerns, to today's government, where mass call-out on social media was needed to get the General to hold a national address on a pandemic which threatens every citizen.

It's quite easy to give up on Nigeria, to seek a brighter future outside its shores, an aspiration that has become "the Nigerian dream." Be sure that PayBac's CULT!, with its psychological flourish, has a song titled so; an intoxicated Cardi B raves about the beauty of the country, comparing it to Disney World – no doubt an experience easily afforded an international celebrity of her status. PayBac flips this brilliantly by denouncing the dream of leaving the country, singing "I go like get money for Nigeria." But only after he's rapped about the perks, which includes the affluence of life on the Lagos Island, access into upper-class spaces, and in typical Nigerian energy, hereditary politics, passed from uncle to brothers to sons. With feature Viveeyan playing the conscience checker, she sings "criminal, criminal, criminal," to PayBac's dreamy Nigerian persona. Make what you will of Nigeria and its upper class, and how the dream of this persona is a nightmare for many, who are constantly being reminded that "honest work is a shame," going by how relatively easy one can get rich with connections and the willingness to "swindle when you have to." PayBac, in "Nigerian Dream," even without mentioning the Ekwensu motif, recognizes the temptation of affluence, and of how one could easily slip into the other side. 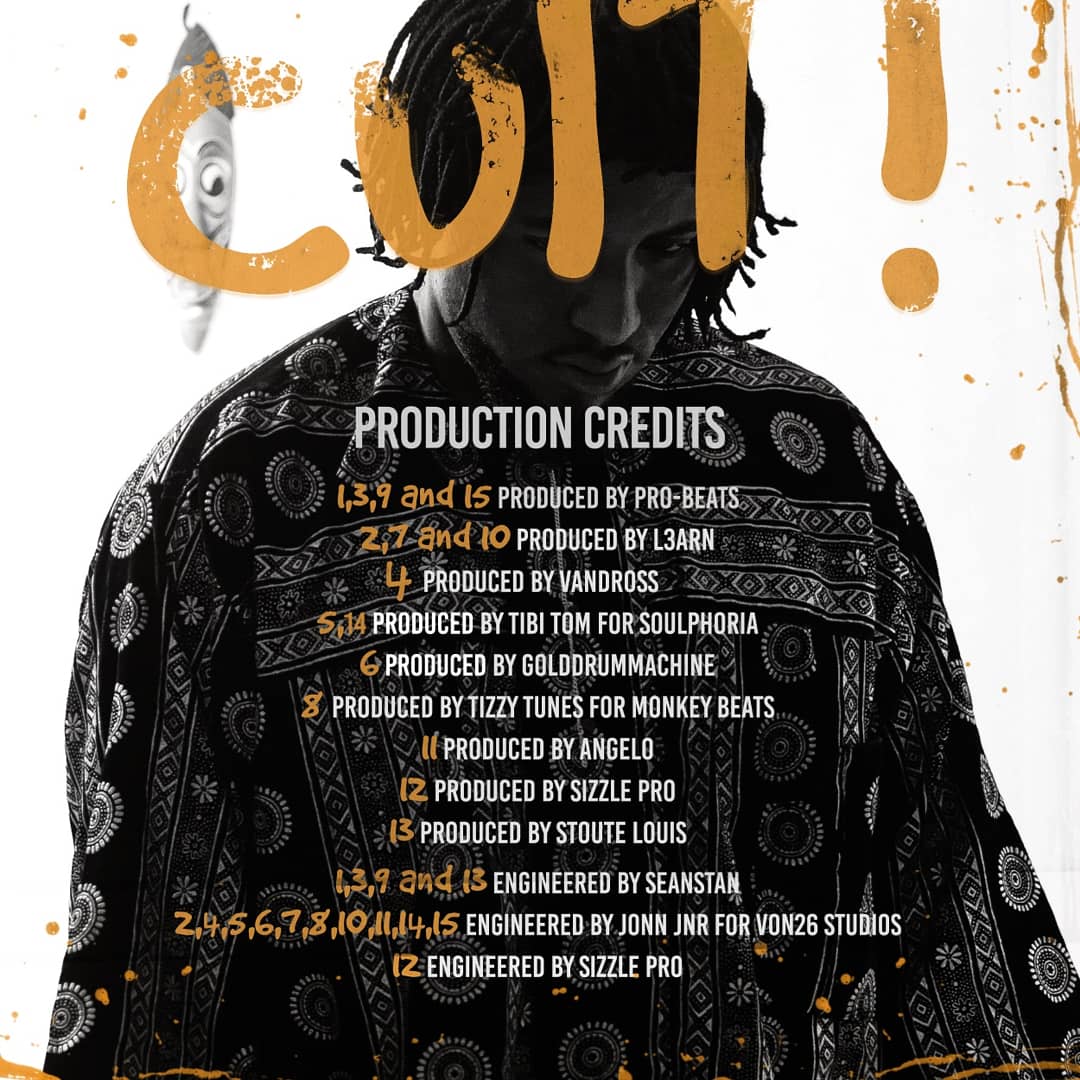 CULT! is a serious project, but this is made light by PayBac's essential tools in his arsenal: a carefree delivery which subjects to musicality over quotables, a brilliant usage of popular culture, and just the perfect set of ears for the perfect instrumental. Take for instance, "Waterside," a Learn-produced song which samples The Funkees' "Akula Owu Onyeara." Over mildly distorted riffs, PayBac casts a romantic to the revolutionary, humanity over the raised placards. A standout Blaqbonez verse – prosaic and rapped in the twang of his uber-confident delivery – sets a brighter hue over the Highlife invoking record, and, again, it's a song that would make good video content, blunt in hand, words sung at the top of one's voice.

I, for instance, would take great joy in learning and rapping along to BarelyAnyHook's beauty of a verse on "Lupita," a cut dedicated to the black star, somewhat like the Kenyan-Mexican actress, whose Oscar-winning 12 Years A Slave movie PayBac alludes to in a bar. "Money in All My Pockets," too, is yet a universally true song which engages via the personal. When PayBac raps about grown ups not knowing shit, his music, which he's described as an attempt to "repair childhood insecurities" comes together.

And that's why you hear a lot of classic Nollywood allusions, on the trailer promoting the album, PayBac undergoes an initiation into a cult, akin to what a frustrated Kanayo O. Kanayo character would get into. But this artiste's initiation, which is driven through its phases by songs off the tape, is more of a return to the vintage past, a tap into that culture of traditionalist ideals – throughout the album, you hear PayBac rapping in this direction: he'll rock crocodile sandals rather than an Air Max, and put his late sister in a circle to speak to his soul. As capitalism attaches itself to adulthood, individualism is deemed the way to go. But PayBac is returning to the past, to a time where children engaged in acts which, although obscure, sparked excitement and creativity. We the cult are PayBac's henchmen in this return. As time has showed us, an ideal future is impossible without first understanding history.

Similar to Kendrick Lamar's realization on TPAB's "Momma," that he didn't know anything "till he came home," PayBac's music, from The Biggest Tree and now CULT!, has always dealt with going back to the past, and settling scores with its reality. In his latest project, however, he looks past himself, and casts his ambitious gaze towards a generation – his generation – and has perhaps crafted the finest (and could in time become a classic) album about its insecurities. Yet CULT! is triumphant. It inspires a lot of fuck yous to a lot of things and people. The brilliance of this album is captured in Bunmiafrica's spoken word which begins "A Tree Grew in Lagos"

A tree grew in the city

Stemming out of the blindness of past generations into

CULT! is a deep dive into the beach which is PayBac. But you're sure to find beautiful cowries to keep in this swim, and it goes without saying that it's a most refreshing exercise. With layer upon layer, PayBac Iboro uses every article at his disposal. From the immaculate art direction by the brilliant Notoviae, to his YouTube channel which is regularly updated with videos which implicitly moves the album's narrative, this artiste clearly put thought – so much thought – into this project, and we're the better for it.

In solidarity of the cult, I say: Fuk A Politician!