Olamide Bares All On The Afrobeats Podcast With Adesope LIVE!

Nigerian rapper, Olamide is the star guest for the 6th episode of the Afrobeats Podcast with Adesope Live and the indigenous rapper is going all-in as he talks to UK based Nigerian media personality, Adesope Olajide on being in the Nigerian music industry and growing as a rap artiste. 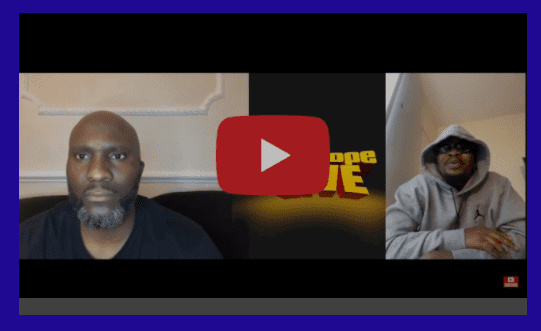 Speaking about growing up in his former hood, Bariga, the rapper talks about the atmosphere of hopelessness that surrounds him as a young man living in Bariga, Lagos state, and the darkness that pervades it. He said;

I need to be honest man, it's very dark out there. You wake up in the morning and you feel like there's no hope, that's what my hood feels like. There's no one or anything around to even motivate you or to make you feel like 'I can do it'. We had no guys in the hood that was doing anything great... it was so bad that at a point if we're going for shows and we're trying to lobby to perform, some bros that usually take us out to these shows. they'll have to tell us to lie that we're from Akoka because if we say we're from Bariga they might not let you perform because they say Bariga people are too razz... I grew up around too many madness that's why most times you see me I'm so laid back ... I no fit shout

On how he motivated himself despite the negative and discourage energy his environment exudes, Olamide said;

I'll have to give it to my parents because of the way they raised me... they always tell me that anything is possible, all I just have to do is to focus and believe and then I can achieve.

Speaking about police brutality and the #ENDSARS movement, Olamide said, you no fit give person wey dey hungry gun to protect people.

Speaking on how he spots the talented acts that are signed, Olamide said;

You know most people like ready-made stuff but I prefer to go for the raw talents coz I've been there and I know when someone has what it takes to take over the world. What I look for most is if the sound is unique and self-discipline. I don't want to work with anybody that I'm going to start teaching everything or telling everything like on your own you should able to have what it takes to stand on your own even after your contract is done... those are the key things I look at.

On if he'll be giving Fireboy DML the same two years he gave Lil Kesh and Adekunle Gold, Olamide explained why that might not be the case this time, He said;

My deal with Lil Kesh and Adekunle Gold was just me testing the waters. But for Fireboy it's a different ball game entirely but it's not long... it's not like a hundred years. It's really all about what myself and the artistes agree on. I had a lengthy conversation with Fireboy before even preparing the contract and he was cool with everything.

On his distribution deal with Empire, Olamide reveals that despite the news that the bag he got was big, the deal is not really about the bag for him. He said;

It's not really about the big bag it's about connecting the dots and moving forward. It's about taking the game to the next level...On my own, I've really tried and I didn't know I would be able to do as much as I've done but growing up I used to look at the likes of Obi Asika and wonder how they do it so imagine someone like me doing same...

There's more to the business than just buying cars, poping in Nigeria and doing shows all around the world. Working with Empire right now, it's been a blissful partnership so far.

On the credit he gets in the Nigerian music industry and if he gets all he deserves, Olamide talks about how important that is to him and how grateful he is for how far he has come.

Nobody owe me any credit, I feel the most important thing in life for a man is for him to know what he is doing and why he is doing it and there's a level ou get to spititailly when you're entangled with your creator, the things of life don't really bother you that much. all I really care about right now is achieving my area,ms and doing what I set out to do... I feel like I'm blessed beyond measures looking at where I'm coming from and I understand my blessing cannot be thesame for another. I am contented with everything God has done for me and I am grateful to God.

Speaking on creating his latest album, Carpe Diem, Olamide talks about the experiment he did with the body of work.

Carpe Diem means Save the day, do the things you have to do. I've always wanted to give people a little bit of the kind of music I enjoy. I've been listening to a lot of playlists, I barely listen to a full album these days, I've been listening to some dope playlists and sometimes I just wish I could share with the world ... so I thought, why not compile a body of work, like a playlist from different kinds of sounds that you like? And that's what I did on Carpe Diem.