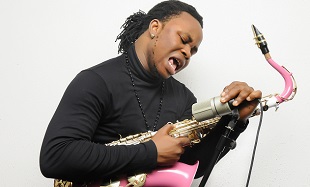 He is the pioneer of Afro-hip-jazz in Nigeria because of his ability to fuse Hip-hop, jazz, and African rhythm together. He is popularly known for his sweet smooth jazz saxophone remixes of popular local and international tunes. He is the C.E.O of Yemisax Entertainment Empire in Nigeria, and also a UN youth ambassador for world peace.

MORE ABOUT HIS ORIGIN

Yemisax was born in the year 1981 in the city of Lagos Nigeria from the royal family of ”ADEOSUN” from Erin-Ijesha, Osun state. He is the last born of his mother out of 4 children. His mother is a school proprietress and an excellent soprano singer. His late father Prince S.A ADEOSUN was a retired banker who worked with bank of America and also savannah bank for 25 years .His father was a church organist, gospel musician, and composer who in the history happens to be the very first man to release Gospel music in Nigeria, leading the choir of Christ Apostolic Church Alagomeji yaba Lagos Nigeria.

Yemisax is a multi-instrumentalist, music producer,singer,song writer, Arranger,music instructor,studio engineer, and compose . He started as a little boy in Christ Apostolic Church C.A.C Oke iyanu by joining the junior choir where he was taught the basics of music, how to play the flute, violin, clarinet, and the Church organ. He later graduated into the senior choir where he held the position of a Church organist for a period of time.

After his secondary school education in Ajumoni secondary school, Lagos Nigeria, he studied computer engineering at the NIIT and later studied studio sound engineering .Yemisax also went to the Muson school of music to study more on theory of music and to perfect his skills in playing the piano, violin, and clarinet. He played professionally with the Muson Orchestra as a violinist and a clarinetist for few years then later picked up the saxophone in the year 1997. he had his first working experience with the ”Compassion Band of Goldmyne Studios of Strong tower house in lagos Nigeria” owned by Captain Jide George and his wife Rev mrs Dele George. Yemisax has done series of international music theory exams and still studying more.

His 19 tracks second saxophone instrumental album which finally brough him to limelight was a solo album after he left the splash band to be a solo artist.

The album was produced by him  and was titled ”Saxophone Mood”in 2008.

Since then, because of his sweet inspiring tone and dexterity on saxophone, he has been rated the No.1 most popular Nigerian saxophonist performing in most of the top major  events locally and internationally.

December 2012, Yemisax released his 4th saxophone instrumental album titled EXCLUSIVES. He also rounded up the year 2012 with a musical Christmas concert tagged ”XMAS WITH YEMI SAX CONCERT” at the ember creek in victoria island Lagos Nigeria which features other great Nigerian artists. In the year 2013, he proposed to his lover “ADESHOLA DUROJAYE” on the 2nd of April 2013, and later got married proper on the 13th of July 2013. They had their first child,a baby boy  “ADEMIDE GOLD ADEOSUN “on the 8th of september 2013. Second child,a baby boy also “ADEAYO JADEN ADEOSUN” was born 12th of december 2014 in atlanta georgia USA . Yemisax released his 5th saxophone instrumental album in november 2015 titled  JALTOS. Also released his 6th saxophone album on the 5th of may 2017 titled SAX THERAPY and the 7th album released on the 20th of oct 2018.

Yemi Sax gets you inspired.