The disciplinary committee of the body governing football in Europe, UEFA, has opened a disciplinary investigation against Olympique Marseille and Lyon in their different Europa League matches played on Thursday, September 30th, 2021. 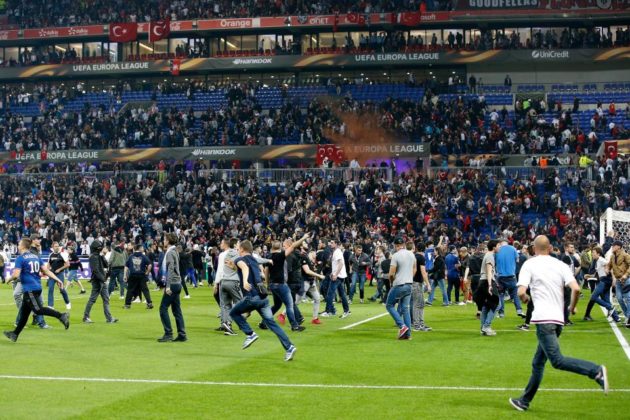 READ ALSO: I WOULD NOT MAKE THE SAME MISTAKE JOSHUA MADE AGAINST USYK – TYSON FURY

They have accused Marseille of throwing objects at Galatasaray players and blocking the passages inside the Velodrome Stadium in the goalless match. The referee abandoned the game for eight minutes in the first half when the supporters of the Frech side took invaded the pitch. L’Equipe confirmed the news on its website on Tuesday, October 5th, 2021.

The second half also witness disturbances that took place at the exit of the stadium, which saw four Police officers injured while five supporters (three Galatasaray and two Marseille) fans were arrested.

Lyon will face the disciplinary committee for crowd invasion into the pitch in their 3-0 victory in the game against Brondby. The Police arrested Lyon supporters before the game, while they arrested some others during the game.

Lyon and Marseille are expected to submit their observations in writing for the committee to study before October 18th, 2021, so that a decision can be taken.