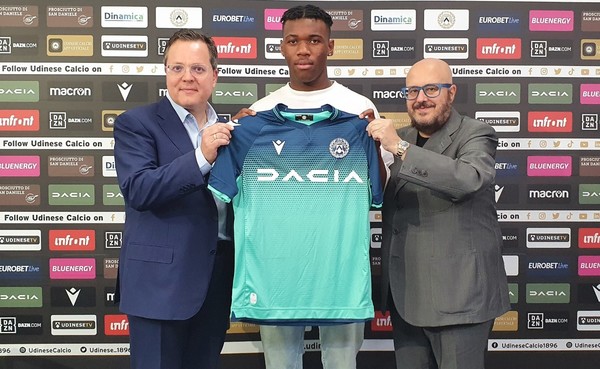 Udogie being presented as a Udinese player

The transfer was announced in the late hours of Thursday 15th July 2021 on the official website of Udinese, as he was proudly unveiled to their audience.

According to the statement on the website after being translated from Italian to English;

A new, great talent arrives at Juventus. Destiny Udogie is officially a Udinese player.
The young man born in 2002 arrives with the loan formula with obligation to redeem from Hellas Verona.
Crystalline talent for years counted among the best in the Italian youth football scene, Udogie is an extremely versatile and physically strong player who can act as a left winger and midfield but also as a defensive midfielder.
He was born in Verona on November 28, 2002, training in the Hellas youth sector with which he made 7 appearances in the first team between the league and the Italian Cup with his debut in the Serie A match drawn on November 8, 2020 from Verona to San Siro. against Milan.
Destiny has been a staple of the Italian youth national teams for years, wearing the blue jersey on two occasions with the under 16 and in fifteen that of the Under 17 with whom he scored two goals, one at the European category in 2019, decisive in the semifinal won 2-1 by Italy against France, the other at the Under 17 World Cup of the same year, still decisive, in the group stage match won 2-1 against Mexico. He also boasts 4 appearances in the under 19 national team and one with the Under 20 team.

From the Club the warmest welcome to Destiny.

Udogie made seven appearances for his parent club Hellas Verona who finished in tenth place in the Serie A standings last season, playing six times in the league and once in the cup.

The defender who is traditionally a fullback can also play as a left-winger or a defensive midfielder. Destiny is regarded as one of the most promising talents in Italy and Udinese were quick in convincing him about their project before competition rises.

Via this deal, he enters the growing list of Nigerians who have featured for the Bianconeris. The likes of Christian Obodo, Odion Ighalo, Stephano Okaka, and William Troost Ekong.

Iyanemo who has represented his country of birth at Under: 16, 17, 18, 19, and 20 levels, shining through the ranks, can be classified as a successful product of the Italian youth system and would be looking forward to making a name for himself amidst his latest opportunity.