Tyson Fury Reveals Conversation with Wilder after the Fight | Read

Undefeated Heavyweight Champion Tyson Fury has revealed his conversation with Deontay Wilder at their end of the fight on Sunday, October 9th, 2021. 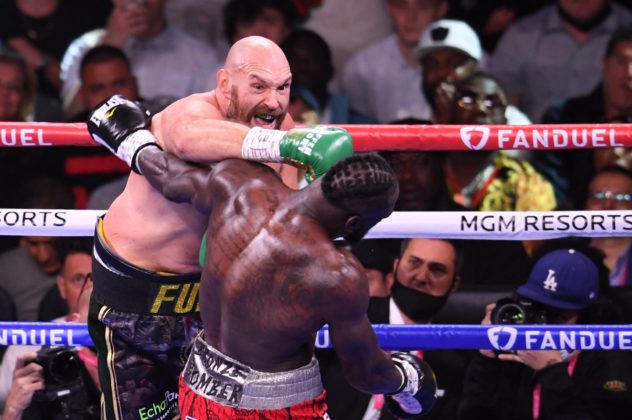 Mirror Fighting confirmed the statement on its website after the fight. Fury said Wilder told him he won’t show any form of fair play following his defeat.

The Brit knocked out the American in the eleventh round of the fight, which was held at the T-Mobile Arena. The last time both boxers fought, Fury knocked out Wilder in the seventh round.

I said well-done mate, and he said I don’t want to show any sportsmanship or respect. I said, No problem. I was very surprised, sore loser, idiot. He got no love for me and do you know why? Because I beat him three times, but I will pray for him so that God will soften his heart.

The Gipsy King also appreciated the effort of his opponent in the trilogy, saying Wilder gave him a run for his money.

It was a great fight tonight, worthy of the best trilogies. I will not make any excuses. Wilder is a top fighter. He gave me a run for my money. I always say I am the best fighter in the world and he is the second-best. Don’t ever doubt me. When the chips are down, I can always deliver.

Fury has won 30 fights which include 22 knockouts, drawn only once, and never lost a fight. He is expected to face the winner of the rematch between Usyk Oleksandr and Anthony Joshua.