Trent Alexander-Arnold has reflected on his poor form for the English National team and believes he has not done enough to get himself a place in the starting XI. The Liverpool right-back has been in fine form for the Reds but has failed to repeat such performance for his national team. 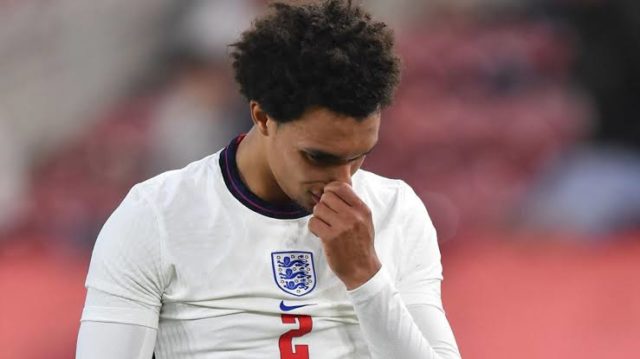 Trent was dropped from the National team in March 2021 following his poor performance for Liverpool. He was later been included in Gareth Southgate's Euro 2020 list, but he could not make the competition after suffering a thigh injury in a warm-up game against Austria.

According to an interview Trent had with the Telegraph, he confirmed he did not play well to get himself a spot on the team. He also said since he made his debut for the Three Lions, he hadn't improved on his game.

The Liverpool player his England debut against Costa Rica in a World Cup friendly game in June 2018 ahead of the competition. He also featured at the tournament in Russia.

I thought, I played really well then, I just couldn't hit the ground running after that. Otherwise, they have been mediocre performances by my standard and that's what I need to improve.

I would say there is a lot more competition for places here. At the club, I am a regular who plays most of the games. I think it is just not finding form and finding the level I need and the level I demand daily. I have just not been able to reach that bar.

You're playing a different system (with England) with different players. It's no excuse, but it's hard to find your feet, to find form when you're not playing in a team with the players every time. Anyone is going to have difficulties with that.

I feel like since I've come into the squad; I haven't really been the best version of myself. I haven't put in the performances I have regularly for my club and I expect more for myself when I play for England. Hopefully, over the next week, I am given an opportunity to perform and I'm able to take it.

I want to win trophies (with England) I want to become a regular. I want to lead the team out. And I think those things are achievable for me.

Trent has 13 caps for the Three Lions with only one goal to his name. He will hope to find his form whenever he plays for England.