Brazil triumphed over Germany in a thrilling under-23 Olympics 2020 football match, all thanks to Brazilian forward Richarlison. 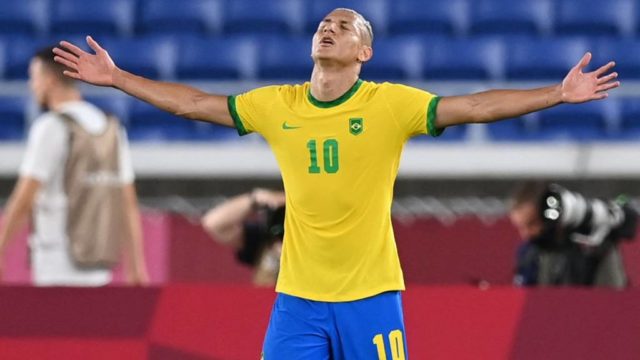 Brazil triumphed over Germany in a thrilling under-23 Olympics 2020 football match, all thanks to Brazilian forward Richarlison.

The thrilling event played today, the 22nd of July 2021, had Brazil demolish Germany 4-2 courtesy of an early hattrick from Everton striker Richarlison. Brazil wasted no time in dominating the game as they got their opening goal in the 8th minute. The goal from Richarlison came after the ball was played into the acres of space behind Germany's centre-backs. His first attempt was too close to the keeper, but the rebound came back out to the prolific striker, who latched it in.

Richarlison got another one in the 23rd minute, after he was left unmarked in the box. He timed his run well to head home Arana's cross. It didn't take long for Richarlison to complete his hattrick, as he curled a shot into the far bottom corner in the 30th minute after Cunha broke through the lines to launch the attack.

A volley from Amiri in the 51st minute gave Germany a goal, after which the ten-man team went on to score another goal in the 83rd minute. Hoping to equalize, Germany's hope was dashed as Brazilian midfielder Paulinho gave a fine finish in the 93rd minute, closing the game for good.