Wolves' forward man, Raul Jimenez, made his first competitive appearance since November 2020, after he had a head clash with David Luiz in a Premier League game against Arsenal. The forward man said the doctors told him he was lucky to survive after suffering a skull fracture. 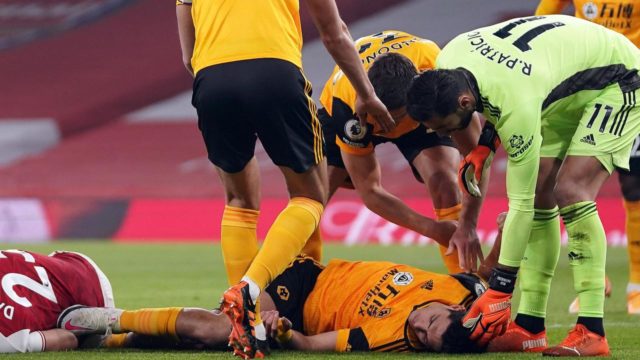 The 30-year-old said in an interview he had with Sky Sports on Tuesday, August 18th, 2021, that he had a little bleeding inside his brain. He also spoke about the support he got from players around the world and the effort of the medical team.

The Mexican received oxygen on the pitch before they rushed him to the hospital, where he had emergency surgery for a major traumatic brain injury and a skull fracture.

Jimenez played 90 minutes for Wolves against Leicester City in the team's opening game of the season on Saturday, August 14th, 2021.

The last time a Premier League player sustained a similar incident was Everton's defender Michael Keane, who had a hairline skull fracture in 2008. There was also Ryan Mason, who fractured his skull in a clash of heads while playing for Hull against Chelsea in January 2017, he was forced to retire from the sports in February 2018.

Petr Cech also sustained a fractured skull in 2006 when he collided with a Reading midfielder, Stephen Hunt. He required emergency brain surgery and wore headgear in matches until he retired in 2019.