Oleksandr Usyk beats Anthony Joshua to an incredible victory to gain his unified heavyweight titles in London. The judges' scorecards were all in favor of Usyk 117-112, 116-112, 115-113 to seal his world-class status. 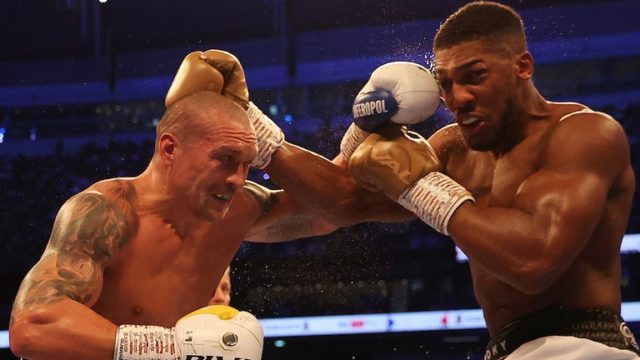 It was a fight that has been spoken about amongst boxing lovers heading into the weekend. The Ukrainian will hope he can follow the footsteps of Evander Holyfield and David Haye, who won cruiserweight and heavyweight world titles.

The fighters sized up each other in the first round with each lead hand, neutralizing one another in a cagey start at the Tottenham stadium. It was a good first round from both men. The fighters came into the second round with the same pattern. Joshua attacks Usyk's head with a neat combination before jabbing to the body to narrow his opponent's angles.

The third round had a few jabs, with Joshua the first to extend at the start of the round. Usyk also landed a net combination moments later. The Ukrainian's jab and bodywork were a worry for the Briton, who struggled to work the angles into the fight. Joshua continued to struggle in the fourth round as he was caught off-balance at the start of the round as he stumbled towards the ropes. The fans continued to cheer their homeboy, but he could not match Usyk.

The fifth round continued with Joshua struggling to match his opponent as the talent of Usyk outboxed him, but he gradually found his feet in the fifth round as he could land a short right-hand blow which ensured he marked the eye of Usyk. The Ukrainian continued to dominate the fight in the sixth round as he ensured the angles were very rare for Joshua, limiting him to single jabs, but the Brit could land a right hand, followed by another neat shot.

The seventh-round had both boxers more open as Usky's jab seemed to be more free-flowing, he landed a neat left hand but Joshua switched the attack but the round certainly belonged to the Usky following some good work towards the end of the round. Joshua got the fans on their feet in the eighth round after he was able to let his shots off and put together a neat combination.

Joshua tried to get into the fight in the ninth round, but the speed and movement of Usyk were always an issue for him. The Briton tried his best to land anything on his opponent but was limited to a single shot. Joshua was able to ensure his straight right hand caught Usyk a couple of times, but he still could not match his speed. The Brit also had a bit of swelling on his eye as he continued to struggle in the fight.

Usyk took charge of the eleventh round as he fired combinations on his opponent, stepping in behind his work and firing away more shots. Joshua needed a knockout to win the fight but he could not land his straight right hand on his opponent. Usyk also dominated the last round, with Joshua having no answers to the masterclass movement of the Ukrainian.

There is expected to be a re-match between both fighters. The winner will face Tyson Fury or Deontay Wilder. Usyk is currently the WBA, WBO, IBF, IBO World Heavyweight Champion.