Manchester United's coach, Ole Gunnar Solskjaer, who has been under fire in recent weeks has not allowed the on-field situation at the club to affect his relationship with the fans. 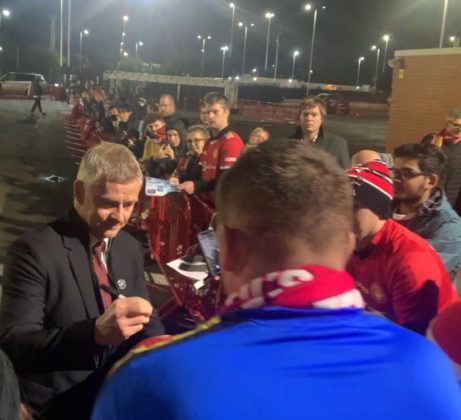 The Norwegian was seen outside Old Trafford following the defeat to Liverpool taking pictures with the fans and also signing autographs.

Manchester United were thrashed by five goals by the Red side of the Merseyside on Sunday, October 24th, 2021. Goals from Naby Keita, Diogo Jota, and a hat trick from Mohamed Salah ensured the Red Devils failed to get a win in four Premier League games.

Ole told Sky Sports after the game, that he believes the club is close to where he is taking them to and this is not the right time to give up.

We know we are rock bottom; we can't feel any worse than this. Let's see where we take it. I have come too far; we have come too far as a group. We are close to giving up now. It is not easy to say something apart from it is the darkest day I have had leading these players. We were not good enough individually and as a team, you can't give a team like Liverpool those chances, but unfortunately we did. The whole performance was not good enough. We created openings, they had changed and they have been clinical. The third goal decided the game.