Manchester City and Liverpool shared the spoils in the weekend's game. It was a game where both teams had a chance to go top of the league if any of them get the winner. The Reds were coming from an emphatic win over Porto while Manchester City were coming in from a defeat at Paris in the Champions League. 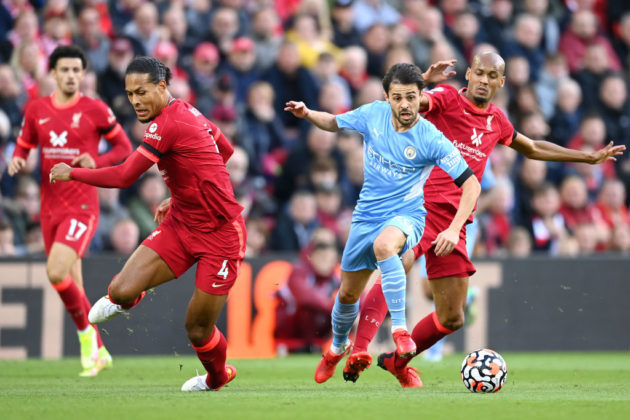 The first minutes of the game did not create any clear-cut chance between the two teams as they both tried to not make any mistake that will lead to a goal. Bernardo Silva created the first real chance of the game in the 21st minute after he went past six Liverpool players to find Phil Foden but the English player could not beat Allison in goal.

Manchester City's Ruben Dias got the first booking of the game after he was booked for dragging Diogo Jota in the midfield as the Portuguese seem to break towards the City area.

City wanted a penalty on the 32nd minute after James Milner came across Foden, who then fell, but the VAR or the referee did not give the call. City took none of their chances, as the first half ended goalless.

Liverpool started the second half on a brighter note, as they were able to string some early passes together. The first chance of the half went to Jota in the 50th minute as he found a space at the edge of the box to get a shot, but it was not good enough to beat Ederson in goal.

The pressure from the second half finally paid off when Mane found the back of the net after 59 minutes of play. The Senegalese connected to a pass from Mohamed Salah, who skipped past a couple of city players. Liverpool created more chances to extend their lead, but they could not find the back of the net.

Manchester City silenced the home fans after Foden slot the ball past Allison in goal as he received a perfect pass from Gabriel Jesus, who slid past a couple of players in Red. Liverpool went took the lead again on the 78th minute as Salah went past Manchester City's defense to hit the back of the net. Kevin De Bruyne silenced the home side again when he lashed the ball into Liverpool's goal, as the Belgian connected to the ball from Phil Foden.

The game ended 2-2 between both teams. Liverpool are second on the table while Manchester City are in the third position.