Chelsea won the UEFA Super Cup defeating Villareal 6-5 on penalties. Kepa Arrizabalaga was the hero for the Blues in the shootout after denying Raul Albiol in sudden death. The game started with Chelsea dictating the pace of the game, as they enjoyed free-flowing football from their wingers. The Blues had plenty of the ball but could not find the back of the net. 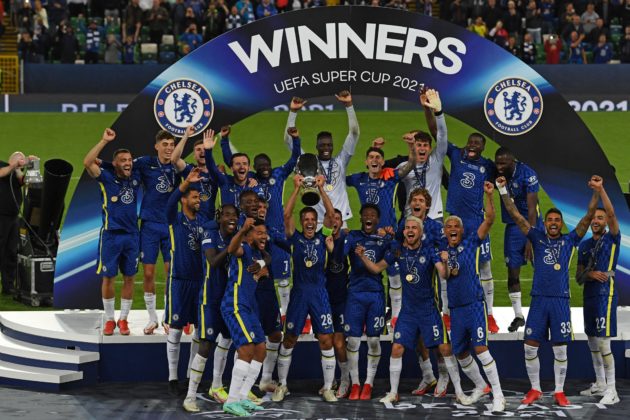 The pressure finally paid off in the 27th minute when Ziyech gave Chelsea the lead, converting and for the Blues as he converted a low cross from Havertz from six yards.

Villareal almost got their way back in the game with Dia, creating a chance in the 30th minute, but Mendy denied the player the chance.

READ ALSO: LIONEL MESSI REVEALS WHY HE SIGNED FOR CHELSEA

Alonso almost doubled Chelsea’s lead before halftime, but his efforts could not beat the Villareal goalkeeper. Chelsea was hit with a blow in the 43rd minute when goalscorer Ziyech was substituted due to an injury, Pulisic came on in his place. The first half ended 1-0 in favor of Chelsea.

Villareal came out with all firepower as they dominated Chelsea, not giving the Blues any breathing space.

The La Liga first chance in the second half was in the 52nd minute when Mendy slipped as he boots a goal kick down the field. The ball went straight to Pino, who released it to Gerard Moreno, but his ball hit the post.

It was an all-around roar in the stand of Villareal in the 73rd minute after Rudiger gave the ball away, which lead to Gerard Moreno getting the equalizer.

There wasn’t anything to separate both sides for the last minutes of the game as it ended 1-1 after regular time. It was time for extra time.

The only chance of the extra time came in the 99th minute from Christian Pulisic when he almost connected to the ball from Azpilicueta, but the American could not find the net. There was nothing to separate both sides as the game ended 1-1 after 120 minutes of football. Chelsea won the game 6-5 on penalties.

This is the second time Chelsea has won the competition after previously lifting the trophy in 1998.