Jurgen Klopp Rules Out Allison and Fabinho Ahead of Watford's Clash

Manager of Liverpool Football Club, Jurgen Klopp has ruled out Brazil's duo of Allison Becker and Fabinho ahead of the club's Premier League game against Watford. 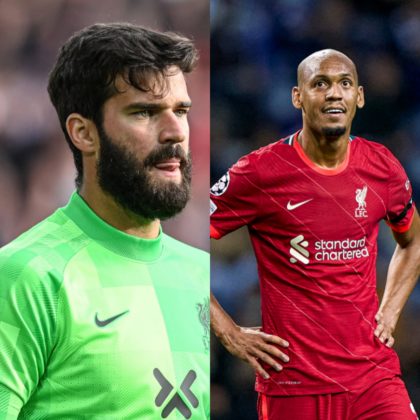 Klopp confirmed the news on Liverpool's website while was speaking in a press conference ahead of the game against the Hornets. He said he did not want to speak about whether he feels frustrated about the situation or not.

The German confirmed that the players will travel from Brazil to Spain ahead of their Champions League game against Atletico Madrid.

The Problem with this answer is always when somebody writes it that If I use the word frustration then (it's), Oh my God, Klopp is frustrated about that.  I'm not. We have no chance, obviously; somebody decided to allow Brazil to play last night, so a few hours ago, and somebody made a decision that we have to play on Saturday at 12:40. It is all not in our hands. If we say something, it is always the same people saying the same stuff. Yeah, that's why you have a big squad. That's all clear, but you have a big squad not for issues with football associations because they put in tournaments, five players to play there, four players have to play there but then you still have a league game to play.

He also spoke about La Liga's decision to cancel Atletico Madrid's game in the league because Of some of their player's engagement in the Conmebol.

As you maybe know, Atletico is not playing at the weekend, our next opponent in the Champions League. Something like that would never happen here and If it would them it would be like, Oh my God, how can they do it for them and stuff like this.

So, we have known it for a while, we made our decision a while ago, we had to sort quarantine issues and all these kind of things, so the decision we made is the boys will not be here, they will go directly to Madrid, wait there for us and then hopefully be able to play against Atletico. They will come back slightly later than us, 10 days is over then and then they can come back and are in our normal procedure again and that's it.

The Reds have 15 points in their first seven games of the Premier League season. They are just a point behind leader Chelsea.