The Italian team captain Giorgio Chiellini has admitted that indeed he placed a curse on England youngster Bukayo Saka to miss the crucial penalty kick that handed Italy the EURO 2020 trophy. 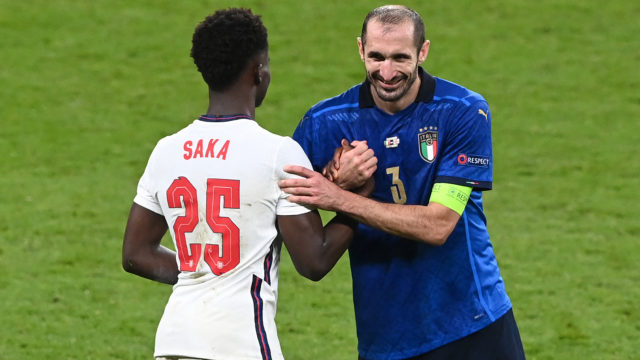 Giorgio Chiellini has admitted that he placed a curse on English teenage star Bukayo Saka to miss the decisive penalty kick that handed Italy the EURO 2020 trophy on Sunday.

Footage after the match showed that Chiellini Muttered the curse word "kiricicho' - a word that's been used by footballers for decades to impart bad luck on the opposition - moments before Saka took the penalty kick which was saved by Italian goalie Gianluigi Donnarumma.

Chiellini, speaking to an ESPN Argentina reporter, clearly states that he muttered the curse words during the penalty shoot-out. He said:

“Ciao, Cristiano. I confirm everything to you. Kiricocho!”

The tale of "kiricocho" dates far back to 1982, when an Argentine professional football club noticed that one die-hard fan’s presence at training continually corresponded with their players getting hurt. The club’s manager, Carlos Bilardo, was highly superstitious, but instead of barring him from matches, he actually hired the fan to attend the club’s matches and "hex" their opponents, instead. The fans' name was "Kiricocho".