Barcelona Football Club has officially unveiled Xavi Hernandez before the supporters at Camp Nou as the club's new manager. 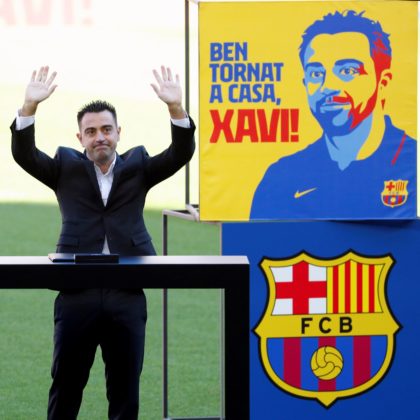 The unveiling which was done on Monday, November 8th, 2021, was reported on the club's official website. Xavi expressed his gratitude to the club for giving him the opportunity. He also thanked the fans for coming out to show support to him.

He called on the supporters to stick by the club during the good and bad times, explaining that they are in bad times, financially and during football games.

I am thankful to the club, the fans, we are the best club in the world and we are going to work and try to win many titles. I also want to say a lot of things to the supporters. We need you. We are in a bad moment, financially and football-wise.

Koeman has led the team to a slum this season following the exit of Lionel Messi to PSG. Barcelona have struggled in the league and the Champions League following a series of results.

Ladies and gentlemen, Xavi has the floor pic.twitter.com/sDmG1VzO5P

And there it is! pic.twitter.com/yFdrGsEuNi