Barcelona has confirmed that Ansu Fati will wear the number 10 jersey for the Catalonia club. The club’s legend Lionel Messi previously won the jersey number. Messi left Barcelona for Paris Saint Germain, in July 2021 after the club stated Financial Fair Play rule in Spain as a reason for not renewing his contract. 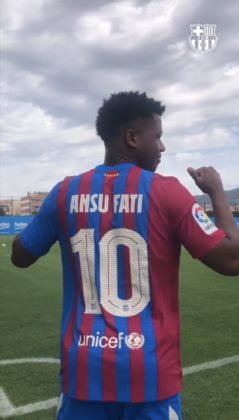 Barcelona announced the news on its official website on Wednesday, September 2021. Messi left Camp Nou after 21 years with the Catalan club, which made him the club’s greatest player for the past two decades. He was handed the jersey number in 2008 after the departure of Ronaldinho from the club.

There have been speculations that Barcelona will retire the Number 10 jersey, but that has ended following the announcement by the club. Fati has records in the league and the UEFA Champions League since he made his debut in 2019. He became the youngest player to score in the league for Barcelona.