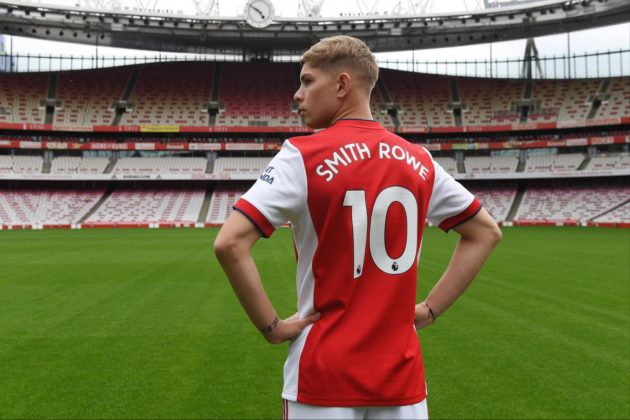 In the official statement, the Club said:

“Emile Smith Rowe has signed a new long-term contract with the club.

The attacking midfielder has been with us since the age of nine and progressed through the ranks at our Hale End academy, featuring for all our youth sides during his development with the club.

His development and hard work with our academy colleagues in recent years culminated with his big impact in the first team last season, making 33 appearances across all competitions.

To coincide with his new long-term contract, we can also reveal that Emile will wear our No 10 shirt for the 2021/22 season.”

Arsenal fans have been dying to see the club give their attacking midfielder a new deal amidst interest from Aston Villa, but they did not expect it to come with the historic number 10. A number that has high importance in the football world and is only worn by the best and most creative players of each team. They were also hoping to use the number as a sweetener in their attempts of luring players like James Maddison and Houssem Aouar to the Emirates who would also love to have their names on top of the 10.

The player, asked how he feels seeing all this happening during a follow-up interview, said:

“It means so much to me. I've been waiting for this moment”

“I want to be a legend here”

“As we all saw last season, Emile is an intelligent player with excellent ability. His sharpness on the turn and exceptional vision have already made him a key player for us. His attitude and willingness to learn have also been very impressive. Huge credit to our team in our academy who have given Emile a great education and have worked superbly to help with his development through the age groups.

“This is another important step forward for us and we’re all delighted that Emile has signed a new long-term contract. It’s great to see another young player develop through our academy system to become a key part of our first team. Emile is a player who represents the future of the club and this is why we have given him the No 10 shirt. We have trust in Emile and we know he has the potential to be a beautiful player for many years to come.”

Smith-Rowe made 37 appearances in all competitions last season scoring 7 times and creating 8 assists, he will be hoping to smash those numbers this campaign as an appreciation for the show of faith from everyone involved in the deal at the London club.