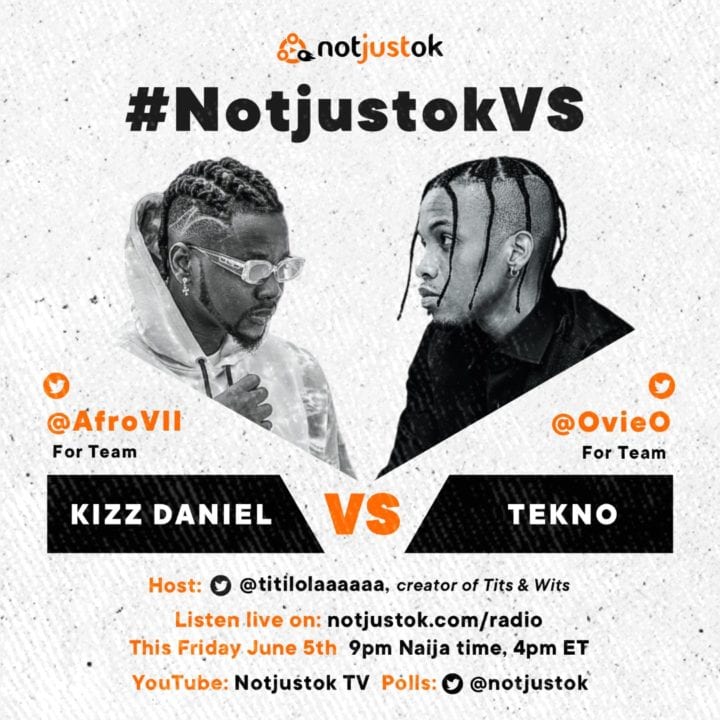 The 3rd edition of #NotjustokVS brings together 2 of the top hitmakers of the last half-decade: Kizz Daniel VS Tekno - The Battle of the Hitmakers!

#NotjustokVS, while it carries the "battle" tag, is more of a celebration of our African superstars and their amazing catalogues. This Friday, June 5, our focus turns to two of the best talents in the game right now, Kizz Daniel and Tekno.

Kizz Daniel and Tekno's careers have both follow a similar trajectory in many ways. Both went mainstream dropping hits under parent record labels - Kizz Daniel with G-Worldwide and Tekno with TripleMG - and are now fronting their own imprints. Both got Next-Rated nominations in 2015 and 2016, respectively. And both have succeeded in going neck-and-neck with the likes of Wizkid and Davido in terms of bangers released in the last 5 years.

For Team Kizz Daniel, we have @AfroVII on deck.

For Team Tekno, we have @OvieO on deck.