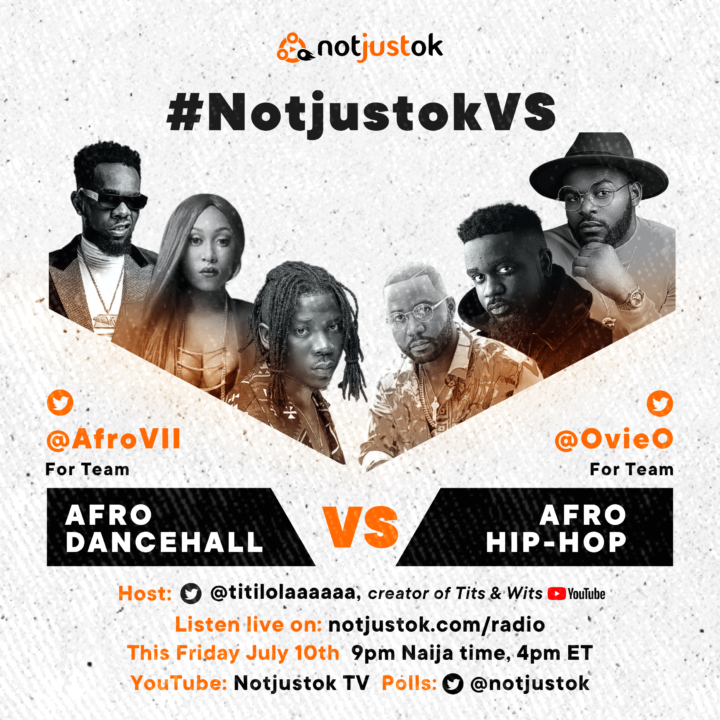 The 8th edition of #NotjustokVS is a pan-African affair! For the 1st time, NotJustOk's weekly Versus extends across the African continent as two of the most popular music genres in Africa go head-to-head: it's Afro DanceHall VS Afro Hip-Hop!

Afro DanceHall - alongside its sister-genre Reggae - has been a major driving force for Afrobeats home and abroad. From the more traditional Dancehall acts like Stonebwoy, Patoranking, Cynthia Morgan, Shatta Wale, Radio & Weasel, to the Genre-fluid superstars like Burna Boy, Timaya, Wizkid, Afro Dancehall has accounted for some of the biggest hits outta Africa in the last decade or two. If we choose to go further back, there's of course the likes of Lucky Dube, Majek Fashek, and many more Legends.

Afro Hip-Hop is also a major force on the continent with superstar rappers like Cassper Nyovest, Sarkodie, Olamide, Falz, M.I Abaga, AKA, Nasty C and Ice Prince taking the genre to greater heights. We've had multiple rap lists here on NJO, and they tend to draw the most interest. Without question, rap music has had its fair share of dominance across Africa.

With this in mind, we feel it's necessary to celebrate both genres and their major proponents on #NotjustokVS.

For Team Afro DanceHall, we have @AfroVII on deck.

For Team Afro Hip-Hop, we have @OvieO on deck.