Nigerian superstar singer, Wizkid has reacted to a viral video of American singer, Justin Bieber performing to some Afrobeats sounds.

Justin Bieber was performing his song, Freedom to a beat that sounds like Afrobeats and Wizkid commended his vocals on the video. The singer shared his reaction via his Instagram story on Thursday, the 12th of August 2021. 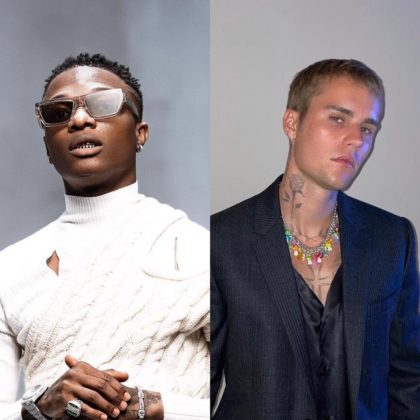 The video of Justin Bieber's performance was from a concert he held for his fans recently. He was performing Freedom, one of the songs off his latest album, Justice. The performance had some infusion of afrobeats instrumentals and this made the video go viral especially among afrobeats fans. Many said the beat sounded like something a Wizkid or Rema would jump on effortlessly.

Wizkid was last night announced as one of the nominees for the 2021 MTV VMAs holding later this year. He bags 2 nominations for his work with Beyonce on Brown Skin Girl. His American counterpart, Justin Bieber led the nominees' list this year with seven nominations.