Guys! You asked for it and it seems like the requests have definitely made something work out... but are you ready?!

Don Jazzy has recently dropped a hint of a massive collabo with his former group member, D'banj.

After Davido reunited Mo'hit crew in front of fans during his 30 Billion Gang show in December 2017 at the Eko Hotel and Suites, fans have been craving for a taste of the past, a taste of a D'banj and Donjazzy doing their thing Don jazzy on his Instagram page gave what is more than a hint with a throwback video of one of their Tours performing Ogbonofelifeli. Captioned with this video, Jazzy had asked D'banj how many countries they should hit and from D'banj's response, we can safely say this Issabanga! 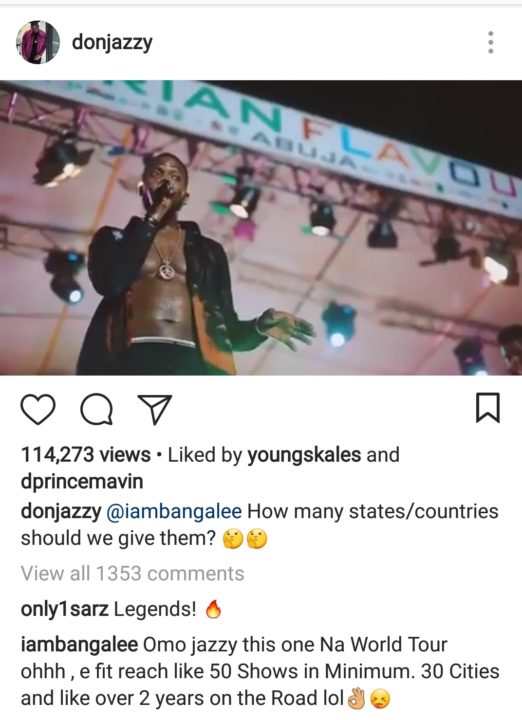 Now that sounds more than just a mere collabo, it is a huge project which, according to Bangalee might take two years! (We think that was a joke).

D'banj had revealed in an interview that Davido had done a lot trying to get them upstage together for his show and after the successful reunion show we all watched, everyone started contacting them to work something out and presently they have about 10-15 cities requesting a reunion show... Wow!

"when we seal the deal, we will definitely make it official.” he said.

This will be a huge success if both powerhouses go through with it considering the hunger people already have to see and hear that combination once more in this generation. Another reason to look forward to it, aside the happy feeling of seeing both stars happy together again, will also be to check how far they have grown individually when performing together and how this will influence their new sound and vibe.

So are you ready? 'Coz we are!