Ikorodu Bois have dropped another of their imitation videos, this time they adapt Wizkid and Tems's Essence in their own way.

Ikorodu Bois jumped on the global wave with Essence being the song of the summer and delivered a perfect adaptation of the Wizkid classic. They shared the video via their Instagram page on Tuesday, the 24th of August 2021. 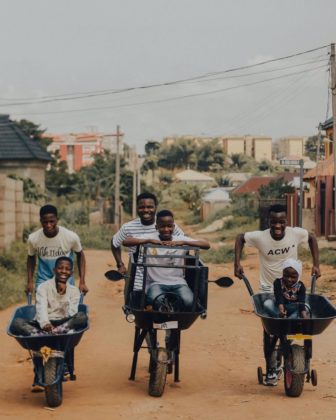 Wizkid unlocked the video for the global smash hit, Essence back in April. Co-produced by the hit-making music producers, P2J and Legendury Beatz, the sublime tune Essence serves as the 11th track on the Made in Lagos project. The video was directed by the highly creative Director K. Ikorodu Bois wrote on the video;

The Ikorodu Bois are international phenomenons in their own right and Wizkid's Essence video is definitely not their first adaptation. They are a group of brothers who mimic and recreate music videos, popular local and international movie trailers. They shot to the limelight after mimicking a rehearsal session of Cuppy. They were nominated this year in the Favourite African Social Media Star category for the Nickelodeon’s Kids Choice Awards alongside Elsa Majimbo, Bonang, Emmanuella, Ghetto Kids and Wian Van Den Berg.